Wrecked recently caught up with Serena Woods, author of Grace is for Sinners to ask some questions about her motivation for her book, how it has been received, and how grace changed her life.

Serena has graciously (pun intended) agreed to give away a free copy of her book to two lucky Wrecked readers.  In order to win, you must first follow Wrecked on Twitter and re-tweet our post.

Also, be sure to check out our review of Grace is for Sinners.

Wrecked: What inspired Grace is for Sinners?

Woods: I had made a series of selfish and destructive decisions that hurt a lot of people.  In the aftermath, I learned about ‘the underbelly of religion’ and the gut-level belief that ‘Christians don’t sin.’  This belief has us ejecting our fallen brothers and sisters from the community. Our ignorance has cultivated a community of ‘failures’ that don’t belong in a world that doesn’t recognize Jesus and have lost their welcome in the world that does. I was on one side of the door and am now on the other. I know things that they, the church and the fallen, want and need to know. I wrote Grace Is For Sinners because when I needed a book like this, it wasn’t there. 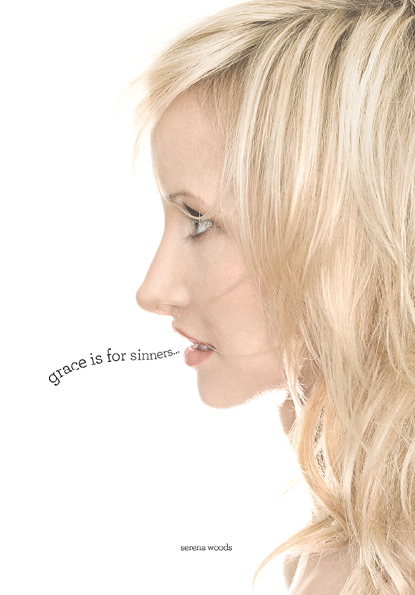 Wrecked: What is the book about?

Woods: I begin by telling you who I am and what I did because you need to know who’s talking to you. Then, I sweep the stuff out from under the rugs of the Christian sub-culture exposing misconceptions and false beliefs. It’s my belief that grace is the nectar of the Gospel. If we’re getting grace wrong, then something on the foundation level of our faith system is jacked up. The customary religious brutality is like any primitive culture that operates on superstition and ignorance. Education is the key to civilized behavior. The last few chapters are all about rebuilding. It’s like being deprogrammed, feeling lost and blind, then receiving a map and a pair of glasses to help you go on your own.

Wrecked: What kind of response (positive or negative) have you received for Grace is for Sinners?

Woods: The responses depend on where the reader has been. Those who have fallen are finally finding the hope of Jesus that the church was unable to give. The typical church attendee is finding a double-fisted challenge to their religion. It’s emotional.  They’re seeing things from a different perspective. It’s excruciating and medicinal at the same time. It’s fun to see people emerge from Grace is For Sinners.

No one, who has finished, is unmoved. It’s that book you want your friends to read because you want to talk about it. The only negative responses I’ve heard were from those who haven’t read it or haven’t finished it. I was very conscious of writing with scriptural integrity. If you’re not changed after reading it, you’re at least heavily messed with.

Wrecked: How do you see churches exhibiting (or not exhibiting) grace today?

Woods: The church so desperately wants to be this powerhouse of purpose and relevance. They want to make a dramatic stand for Jesus and save souls right and left. Yet, church members are dropping like flies. For every one person sitting in the pew, there are six at home who will never go back. The people are dying because the perspective is off. Christians, generally speaking, are vicious, especially to each other. If the world had to describe Christians in one word, that word would be ‘judgmental.’

Wrecked: Do you think most Christians have trouble accepting grace? What about giving it to others?

Woods: Absolutely.  Accepting means admitting moral failure. We fight to the death to justify our choices. The freedom is found when we dump our excuses. There is no self-justification and that’s the point of grace. In giving grace, the parable of the prodigal son comes to mind. The prodigal’s brother wouldn’t attend the celebration when his brother came home.

Another story that comes to mind is Jonah sulking on the beach after God forgave a city that Jonah didn’t think deserved it. It’s hard for us to believe that God isn’t keeping score. He can forget, but we can’t. Christians have cultivated this sense of entitlement and are unable to see themselves for what they’ve become: spoiled and self-righteous. They can’t stomach the audacity of grace much less offer it. Christians don’t know how to offer grace without looking like they are condoning the sin. I believe they want to do the right thing, but just don’t know how.  When it comes down to it, it costs too much. What’s scary is that denying Christ is not about sinning, it’s about rejecting his work on the cross. Sinning is what he came here for. If there were some other way, God would have taken the cup from Jesus when he asked in the garden. But there was no other way. We need to know what we’re saying when we have a problem with grace. We need to see that we’re standing in between the sinner and the cross. We need to ask ourselves which side we’re on.

Wrecked: How has the message of grace personally impacted your life?

Woods: It’s the only reason I have legs to stand on. I was in a place where I could not undo what I did. There is no time machine. There is no price I could pay that would take away the damage I did. The crimes stacked upon crimes crushed me. The people who I hurt were lined up so far in the distance that eventually I didn’t even know who they were. Hearts I had never met were bleeding because of my selfish behavior. The excessive load of debt and my inability to stop the bleeding was like a pack of wild dogs ripping me to pieces. When Jesus found me, I was inside-out with grief. I couldn’t pay up. My value disappeared and my debt remained. Jesus pointed to the day on the calendar where his body opened up and spilled his life. The half dead lamb left a trail of blood on his way to slaughter. And Jesus said, What I did is bigger than this. Your sin is what that was for.’

Wrecked: How can people find out more about Grace is for Sinners, and what can we expect to hear from you in the future?

Woods: I have a website and you can always email me at hello@graceisforsinners.com. My next project tackles other faith questions and issues.

Win a free, signed copy of Grace Is For Sinners!

7 thoughts on “Author Interview: Serena Woods of Grace is for Sinners”