The negative thoughts came out of nowhere. No warning or sign. It’s like I was walking down the aisle at the grocery store, distracted and looking the other way and then BAM I turned around to collide with an ex boyfriend I shared a bad break up with and a regrettable part of my past. The next thing I knew I was on the ground of aisle 6 with my bruised pride, dignity and produce scattered around me.

My ex boyfriend was depression. I remember two years ago how he liked to get me alone and lure me into his arms of inadequacy. One kiss from him would leave falsities on my lips that I repeated over myself. I remember snuggling into a dark place with him, a place where no one else was welcome. I can still smell the cologne of shame that lingered long after he left. His hugs would squeeze every ounce of confidence out.

I remember cancelling a flight just to spend more time with him. I skipped a wedding and instead soaked in his lies that I wasn’t pretty enough to put on a dress and dance. I ended things, but I used to always worry I would run into him at the places we often found ourselves as a couple together.

It all stemmed from comparison to other people. Then I avoided my community as an invisible cloud hung over my days weighing me down. I came into this aisle with a shopping basket and ended up putting in more than I expected. I should have brought the cart.

Next thing I know I was lying on the floor of month six and all my flaws were scattered around me. I looked up at what had knocked me down. I stared at my ex depression in the face and he embraced me as an old friend whispering in my ear that I was a burden, an annoyance, “why are you even here?” He spoke to me.

Additionally, throughout the past six months carbs have been my main food group. I mean would you turn down authentic Thai food? Rice and noodles make up the majority of my meals. My face is breaking out more than ever and the result of so many carbs is a few extra inches on my waist accompanied with a few extra inches of low self esteem.

All I wanted to do was lie on my thin sleeping mattress on the floor and watch Gilmore Girls until the month was over, until the dark cloud lifted. I wanted to curl in the fetal position in aisle 6 and just wait for the shame to go away, but it loomed.

This month my home is a small town in northern Thailand. In the past six months I have been part of a mission trip where I have called six different countries home. I’ve had the privilege of being God’s messenger in many cultures, but six months in and I thought to myself, “How was I going to begin to share God’s love in Thailand if I was having trouble loving myself?”

Our ministry in Thailand is teaching English at a school that is primarily Buddhist. The people are worshipping false gods and ancestors and the religion is cultural bondage that can be hard to break through. I felt an urgency to tell people about Jesus and the freedom He brings, but I was inwardly struggling with my own bondage.

The good news is that God turns our bondage into our banner of victory – for us to receive and pass it on to others. It’s not about me. It’s about bringing glory to God.

If it was up to my own strength, I’d still be on the ground… frantically trying to put my life back together. I was trying to gather all my scattered grocery store items and place them neatly back into my basket that was too small. That would do no good. I had a choice to make – I could harden my heart and wallow in my self doubt pity party – OR I could lean in and take His hand.

Thankfully I have a Father who is always with me. He draws near to the hurting. He speaks truth to us (John 17:17). He was there to pick me up and He rolled up the cart.

It was two years ago, after my break-up with depression that I began to re-tune my ear to the truth that God speaks. When I heard what He had to say, I felt the tug to go on this 11 month mission trip where I find myself in month 7 already.

The fact that I’m even on this mission trip is proof that God loves turning our hot-mess, aisle-6-face-planting self into messengers of His glory. So when I felt the heavy weight of these depressive feelings on me knocking me down, I lifted them up to see what Jesus had to say about it.

It felt like spiritual weightlifting. The Lord was building my muscles in my aisle 6 struggle. My loving Heavenly Father was calling me out of my distractions and showing me how to bench press my negative thoughts up to Him. It was creating an endurance to run the race set before me. (Romans 5:3-5). The race where the ultimate goal is to know Jesus and make Him known.

From spending that time with God – writing down my prayers, sitting with Him and the words He spoke to His people in the Bible, a clarity came. I could see clearly the doors God was opening to share the gospel. When someone asked if I wanted to take our lunch break to have worship in the school courtyard – I took it.

Our lunch worship drew students in. They were curious and listened intently. We met a few believers and got to encourage them. We learned a Christian song in a new language. Praise God that He picks me up off the floor, that he’s with me in my valley.

I’m gaining my balance and the weight is getting lighter. I’m not saying that these negative thoughts will never sneak up on me again. I’m saying that when they do, I’ll be stronger. I’m saying maybe next time I won’t face plant. I’ll be paying better attention, expectant that a life with Jesus is not a life without struggle. The enemy will attack when my guard is down, but God turns that struggle into growth.

He prunes the vines and cuts them back so they can bear more good fruit.

As I walk out of this month into the aisle 7 on the mission field it’s important for me to remind myself the words God speaks. Those words are truer than anything any human could say or do. Depression doesn’t define me, but what Jesus says about me actually does. So today I’m starting to write those truths on my arm every day. Just as I write it on my arm, it’s written on my heart and will be used as armor against my next encounter with my ex Mr. Depression.

“But we have this treasure in jars of clay to show that this all-surpassing power is from God and not from us. We are hard pressed on every side, but not crushed; perplexed,but not in despair; persecuted, but not abandoned; struck down, but not destroyed. We always carry around in our body the death of Jesus, so that the life of Jesus may also be revealed in our body.”

If you feel like you’re face planting in whatever aisle life has you in – First, what is your truth? Ask God. Write it down. Remind yourself. Second, let’s talk. There’s something so powerful about a “me too”. God could be using your struggle to build you up, make you stronger and chances are your story will help someone know they’re not alone. 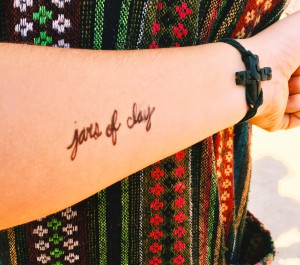