Jesus loves you. Jesus died on the cross for you and for your sins. Jesus is the way.

After hearing these words over and over again in my walk with God, I’m sure I’m not alone when I say that after a while, they don’t hold as much meaning as they are meant to. After a while, they seem repetitive, and I’ve become numb to what they actually mean. I know Jesus loves me. I know Jesus died for me. But though I’ve considered myself a Christian for many years, the reality of what, how and why Jesus died on the cross for me, and what it all actually means—has been hidden beneath foggy words and the old church songs.

Easter has just passed. I’ve celebrated the holiday since I was born, but more with chocolate candies, plastic eggs and too much eating than allowing the reality of the cross sit on my soul.

This year was different.

I went to a Good Friday service where we all sat in silence with our bibles and an excerpt from a book explaining four different aspects of Jesus’ pain on the cross.

If I’m being totally honest, I’ve never fully understood how Jesus’ death was a payment for my sin. I knew that his death was obviously significant, but beyond the facts of what happened and being told that through His death, my sins are paid for–it hadn’t quite clicked for me.

On Good Friday, I spent an incredible hour just reading and looking over what scripture has to say about it all and have made me look at the Cross and even Jesus in a new way. This is what I found, paraphrased from Systematic Theology by Wayne Grudem.

-Death by crucifixion meant a very slow death by suffocation… “Each respiratory effort would be come agonizing and tiring and lead eventually to asphyxia.” Sometimes, crucified men would survive for several days, nearly suffocating but not quite dying, which is why the executioners would break their legs so that death would come quicker.

-Jesus endured the psychological pain of bearing the guilt for the sin of the world, meaning every person who ever lived and will ever live. “In our own experience as Christians we know something of the anguish we feel when we know we have sinned. The weight of guilt is heavy on our hearts and there is a bitter sense of separation from all that is right in the universe. In fact, the more we grow in holiness as God’s children, the more intensely we feel this instinctive revulsion against evil…Now Jesus was perfectly holy; the thought of evil, or sin contradicted everything in his character. Yet he willingly took upon himself all evil, all that he hated most deeply was poured out fully upon him. Christ literally became sin, as it was sin that was put to death with Christ (2 Corinthians 5:21)

-“God himself (Father, Son, Holy Spirit) is the ultimate standard of what is just and fair in the universe, and he decreed that the atonement would take place in this way, and that it did in fact satisfy the demands of his own righteousness and justice…There is an eternal, unchangeable requirement in the holiness and justice of God that sin be paid for.”

-When Jesus cried out “Eli, Eli, lama sabach-thani?”, that is, “My God, my God, why have you forsaken me?” (Matthew 27:46), he showed that he was finally cut off from the sweet fellowship with his heavenly Father that had been the unfailing source of his inward strength and the element of greatest joy in a life filled with sorrow. As Jesus bore our sins on the cross, he was abandoned by his heavenly father. He faced the weight of the guilt of millions of sins alone.

Ok, this is huge.

I had often wondered why Jesus asked God why he was forsaken on the cross. But it makes sense now that he was. How else could be become fully sin, when it is sin that separates us from God? 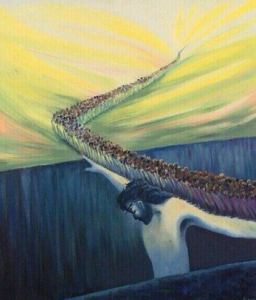 -More than that, (this is also huge!)—God the Father, the mighty Creator, the Lord of he universe, poured out on Jesus the fury of his wrath: Jesus became the object of the intense hatred of sin and vengeance against sin which God had patiently stored up since the beginning of the world.

-Jesus’ desolate cry to God was not a cry of total despair. Jesus knew that he would rise again and he knew that he was dying for our sins. He had said that he came “not to be served but to serve, and to give his life as a ransom for many.” (Mark 10:45) Jesus’ cry is a quotation from Psalm 22:1, in which the psalmist was eventually rescued by God and his cry of desolation turned into a hymn of praise. Jesus knew that God would ultimately deliver him. And He did.

It’s a scientific fact, bearing hundreds of eyewitnesses that Jesus Christ was crucified and was raised from the dead three days later. It’s the heartbeat of Christianity.

If we don’t understand the cross and what it means, we are severely lacking. I’m embarrassed to say that it’s taken me this long to get these basic revelations of the crucifixion of Christ, but I feel that the cross is something that one can always learn new things about. Beyond the facts of what happened, there is so much symbolism and depth as to how it speaks to us today.

This is the core of our faith. And this is why Good Friday is good. We have been given a pathway to God! And it’s because of Jesus, who literally became our faults, so that we can receive life. As Jesus himself said, “It is finished.” 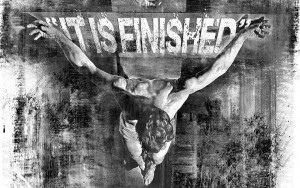