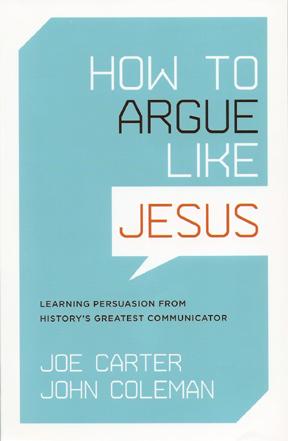 Argue is a word that gives many connotations. In my life, argue has meant “to engage in a quarrel.” My parents would argue when I was a kid, at least until they were divorced. Is argue a bad word?

Of course not. Argue can also mean, “to put forth reasons for or against something.” When you go to court, you present your arguments. I will present my arguments now both for and against How to Argue Like Jesus.

I was hooked by the book title. I had visions of those old time books with quick ways to make friends or influence people. Could Jesus help me win domestic discussions? How will He help in my business career? To borrow a turn of phrase, one should never judge a book by its title.

In this case, the title seemed more hook than substance as the authors, Joe Carter and John Coleman, start the first three chapters spending a great deal of time explaining the three components of Aristotle’s rhetoric: logos, pathos, and ethos. While there is an explicit note in the introduction to clarify any implication that Jesus was a follower of Aristotle, the first three chapters come across as one trying to fit the Bible into Aristotle’s model than it does showing Jesus as a great communicator.

Mixing the parables and influence of “history’s greatest communicator” after examples such as Ronald Reagan’s speech on the Challenger space shuttle disaster take away from the powerful messages that the book is titled after. A simple tweaking of opening each chapter on the words of Christ rather than lesser examples would have kept a stronger sense of theme to the books title.

Contextually, this book is not an easy read. We are dropped right into the depth of the intricate details of Aristotle’s rhetoric. While I felt that many of the examples of Christ in this book don’t go far enough in their examination of Christ and the scriptures, I would also suggest that many of the examples take a leap of faith to follow. In an effort to find scripture to meet each of the descriptions, I submit that some of these examples may go too far.

How can one find an example for the subheading “Tactical Flaw: Making Yourself Real?” The authors admit that there are no instances in which Christ used weakness to win sympathy. However, “… the Gospels do provide an archetypical example of the second meaning [of ethos]: showing the sacrifice one has made for his audience.” The example given is the account of Christ washing his disciples feet in John 13. While this is an example of serving others, most Christians would look to a much stronger example of sacrifice through Christ going to the cross. Based on this example, the reader is asked to conclude that we should admit our weaknesses while not fearing to say, “I don’t know.” The logic used to make this leap in reasoning seemed a stretch.

Using worldly examples from modern times as relational points for Christ made me uncomfortable accepting the evidence. The authors speak about borrowing credibility from authoritative sources to increase your own. This topic begins with an illustration of the credibility of The New York Times. “If I am speaking on a subject, citing the Times can heighten the credibility of my argument.” This is followed by Christ’s example when quoting scripture to Satan during His temptation in the desert.

“Time and again Christ relies not on his own authority but on the authority of his sources, in this case God as reveled through Old Testament Scripture a source having great authority with Satan…”(82)

While not “wrong”, I’d certainly argue that the Lord quoting Holy Scripture to Satan is not the same as my quoting the New York Times.

It seems that in an effort to reach both Christians and non-Christians with this work, How To Argue Like Jesus has really missed the mark of Jesus’ greatest communicating tool: the effect of the Holy Spirit on our broken hearts in the person and words of Jesus Christ. While Christ is examined, Scripture itself feels ignored. Advice from the authors to “cite sources from popular culture” when working with kids, instead of exhorting us to use Jesus and the scriptural examples He’s given us leaves a mixed message to both audience types.

In the end, perhaps it all comes back to the title. An expectation is set that this book didn’t hold up to for me. I submit that this book is a terrifically written thorough examination of effective communication, illustrated through the examples of many great communicators in history, including Jesus.

But if I really want to learn about Jesus as the greatest communicator in history, I’ll recommend spending more time studying my Bible.

About the authors:
Joe Carter is the managing editor for Culture11, an online magazine. His personal blog, The Evangelical Outpost, was voted “Best Religious Blog” in the 2005 Weblog Awards and was named one of the “Best Spiritual Blogs” by Belief.net. Carter contributed to Crossway’s The New Media Frontier.

John Coleman was named the nation’s top overall intercollegiate speech competitor in 2004. After working for two years at a top management consulting firm, Coleman is currently pursuing an MBA/MPA at the Harvard Business School and Harvard Kennedy School.


Jody is a father of two from Canada where he works as a production coordinator for a local website. Eh?