Im sitting outside of local eatery Pucketts with a couple of guys I just met through a friend: Robbie from the Robbie Seay Band and the band’s manager Jeremy. They only have a few minutes, and distractions abound. Mid-way thru the conversation, we laugh, because were so very thankful for the distractions and the diversity that they represent. 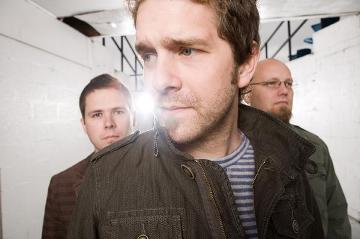 Above us, country music blares over the outdoor intercom. To the side of us, trucks and cars drive down the street every few seconds. Behind us, theres a movie being filmed. Yes, this is Nashville, Tennessee. And yes, were sipping hot coffee in 85-degree weather. I ask a few interview questions, but mostly the conversation carries itself.

Robbie says that theyve been inspired by artists such as Derek Webb and writers like Donald Miller. I ask Robbie what he thinks distinguishes this generation of young people from other generations, what special purpose we have to fulfill on this earth. He looks at me and says, rather frankly, “I dont know.”

He goes on to say that hes cautious to think along generational lines and prefers to worry less about what distinguishes us from our predecessors. For Robbie, it seems to be enough just to try to live like Jesus in community, and thats been the same for every generation. “The calling’s pretty universal; know what I mean?”

Jeremy doesnt say much; he often nods in agreement with Robbie and smiles. He adds a comment or two in the middle of the conversation and visits with the server for a minute, but mostly just listens. Robbie does a lot of the talking, explaining that they spend about half of their year on the road with the band playing shows and the other half leading worship for their church in Houston, Texas. Amidst the distractions and unique ambience, I begin the interview:
How did the band get started?

“The band got its footing as part of a church,” Robbie answers. “Thats a big part of what we do its our community down there. As weve figured out what this looks like for us…its always been in the context of our church.”

The past couple years for the band have been an exploration of what it means to be missional. Living in the wealthiest country in the world, theyve really sought out how to get involved in what God is doing in the world. They seem very driven to make a difference but also humble in their attempt to live out the Gospel.

“What I love about conversations like this is that by no means are we the only ones; its happening all across the country,” the front man remarks. Their new record is called ‘Give Yourself Away’ and focuses on issues of Christians giving themselves to God and the broken people he loves.
How do you think the American church lines up with Jesus model for discipleship and his intentions for church?

Robbie says, “I probably spent years personally trying to figure out all the things that are crappy with the church. Over the last couple years, weve realized that there [are] a lot of folks that are trying to get to core of who Jesus was. And before Jesus talked about discipleship, he talked about the poor.”

Is music an end to itself?

“From the beginning, I think God has a calling on us to do work. One thing that we [as a band] talk a lot about is we really encourage ourselves and others to be faithful to that calling of ‘artist.’ …Music is part of art, and art is an expression. And we want to do that to the best of our ability. But also, art is provocative. A good painting should be provocative, and a good song should lead you to something else, tell you a story, push you in certain ways, offend you, or comfort you. I think that when we dont do that, whats the point? Whats the point of art that doesnt move you in a certain way?”

Jeremy finally speaks up, adding that its an exciting time to be alive, which includes the plethora of distractions surrounding us during the interview: “Im glad Im alive right now and Im in this position and at this time in the church.”

Robbie agrees and adds, “I do think that its the most powerful time… If you live in this country and youre a believer in Christ, youve got money, resources; youve got community, youve got support, to make a difference. Seek out what kind of difference Gods calling you to make and do it. We just dont have a lot of excuses.”

“ACTION!” a voice shouts in the background. We close the interview by discussing the bands involvement with Compassion International in Uganda and other missional efforts they support, and as we say goodbye, the director yells, “CUT!” Jeremy is right it is an interesting and exciting time to be alive.

Find Robbie Seay Band’s new album, Give Yourself Away in stores 8.28.07.

Jeff Goins is editor-in-chief of Wrecked and works with The World Race, an eleven-month church-planting pilgrimage where twenty-somethings find the heart of God amongst the poorest of the poor. He eagerly awaits getting married.