A single band, or person, cannot just wake up one day and arrive at a level of super stardom that U2 has achieved. 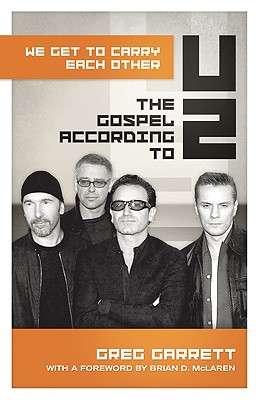 U2’s evident ability to create waves of global change has come and washed over our culture from the packed concert halls of downtown New York City to their work with the RED Campaign in the remote villages of Africa.

Greg Garrett’s book, We Get to Carry Each Other, describes what has made U2 the band that it is today and how “they were not in music just for what they could get out of it.”1

It is easy to look at the members of U2 as super human. To see their achievements as beyond what we, normal, people could ever accomplish on our own. However I enjoyed reading that from the very beginning each member of band: The Edge, Larry Mullen, Adam Clayton and Bono, did not approach their commitment to each other, and their calling as a band, lightly. As the book describes, U2 was formed with individuals that were out to make a difference, committed to one another.

When U2 began, they were not ready to face the world at the level to which they are currently operating. In fact, “U2 began with significant handicaps,’ one being that they were not yet…proficient musicians. But their youth, their energy, their intensity, their desire…set them apart from the very beginning.”2 If they were faced in the mid-1970s with what they are facing today I am confident that such fear would have ripped through their very beings, handicapping them into inaction. They started small, similar to where we all begin, and kept moving forward in spite of what the world said around them.

U2 took a big risk to start their band and venture out on their own, as you will discover in the book. However, waves of global change would not have been made without the first step. They each decided to move forward. They mustered up the courage to risk and face their fears of failure. U2 also knew that they would not be able to do it without one another’s help. The members of U2 saw the value of committed community and knew that they would in fact soon learn, in a new way, what it means to get to carry each other.

Maybe you “still haven’t found what you are looking for.”

Remember that we do need to carry each other.

As we face our next steps, may we be emboldened with courage to move. May we remember that big change can happen in and through us, but we must take steps to make it happen. May we be washed over with the courage that we need to move forward. May we remember that no matter who we are, where we are, or what we are going through we have the high privilege of sojourning with one another and carrying each other.
I recommend Garrett’s book, We Get to Carry Each Other, to a strong fan of U2. I think that whether or not the reader has a Christian background, or any spiritual beliefs, he or she will be able to understand the biblical concepts that are presented. Garrett broke down complex Biblical ideas and made them easier to digest if the reader has no context in which to place them.

In the same light, because Garrett took so much time to explain his point I found myself getting lost in the many different angles, and scholars, that he used to explain one topic.

We Get to Carry Each Other seems to be a personal story in which Garrett invites the reader to catch a glimpse of how U2 has impacted his life and journey spiritually, mentally and emotionally.

I think that if U2’s music has had a strong impact on your life you will enjoy this book.
1 Greg Garrett, We Get to Carry Each Other, 1st ed.(Louisville, Kentucky: Westminster John Knox Press, 2009)

Samira currently lives in Orlando, Florida. Samira works as a calligrapher while attempting to seize every moment to be adventurous and survive the humidity.