I once wrote a post on my blog at Beliefnet.com in which I threw out this joke: 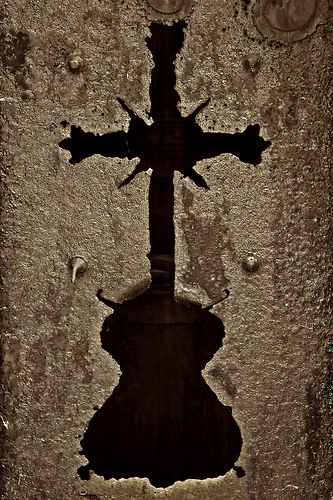 It was a joke about the hypocrisy of Christian music fans, obviously. Or maybe not obviously, because the post – and the other jokes, like “You might be a Christian music fan you’ll go see Third Day play at a mega-church but won’t go see them at your local concert arena” – went over the heads of most of my readers.

Consider the Jonas Brothers, for example. The trio started out in Christian music, got a little attention, and then really blew up when they moved to mainstream. None of their music would ever be mistaken for praise and worship or songs that promote a Christian message; it’s just fun, clean teen pop. But their albums are available in the Christian bookstore. So, are the Jonas Brothers Christian musicians or not?

I’ve been writing lately about Ray Boltz and his decision to come out of the closet and admit that he’s gay. I heard from a lot of readers who said they couldn’t listen to his music any more, even the pre-out-of-the-closet stuff. And yet I was recently told (off the record) by an industry professional that if fans knew the number of artists struggling with homosexuality (and not always successfully, by evangelical standards) they would have to ditch a significant portion of their music collection. Is it still Christian music, as long as you don’t know about the artist’s personal life?

There was a time when a Christian song was defined by the number of times the artist used the “J word” – a.k.a. mentioned Jesus by name. That would make Kanye West’s “Jesus Walks” a Christian song, right?

Sometimes we define our artists by the label they’re signed to. Relient K was Christian when they were with Gotee and when they moved to Columbia were criticized by fans for not being Christian anymore. So your record label determines your spiritual standing, right?

While the restrictions of the early Christian music industry hampered the creativity of many artists (there are only so many ways you can work a J-word-a-minute into a song and still be creative) I don’t know that the current “anything goes” mindset serves Christian music fans any better.

When you ask Christians to define Christian music, they say things like “It’s music created by an artist with a Christian worldview” or “It’s music that glorifies God.”

That definition applies appropriately to bands from various musical genres whose lyrical content is focused clearly on the contemplation of God, Christ, redemption, and faith, even if it’s more poetic than outright “Jesus Saves” – from Chris Tomlin to downhere to CeCe Winans. But what about the “Jesus is my girlfriend” category, where lyrics are deliberately vague so listeners can make up their own mind what the band is singing about? Those bands don’t need to be labeled “Christian.”

And yet when they’re not, savvy music fans catch the spiritual undertones in their songs and want to make them admit they’re Christians. In every interview I’ve read lately with Anberlin, for example, the band is asked if they’re a Christian band. Does it really matter? Can’t you listen to music and examine the lyrics for yourself and see if they challenge you spiritually? Can’t you just enjoy the music for its artist quality, as long as the lyrics aren’t completely contrary to your own beliefs? Don’t like the subject matter of Katy Perry’s “I Kissed A Girl”? Then turn it off. But don’t waste time examining whether she is or isn’t a Christian now, just because she released a Christian album in 2001 and still sports a Jesus tattoo. You either like her music or not.

Churches across the country are holding services they call U2charists, using songs from the band U2 for worship. I don’t know anyone, including U2, who would label the band “Christian”. But do you ever wonder how many Christians are praying for Bono to just don the Jesus fish so we can assign him a spot on our team?

I think sometimes the Christian label just gives us permission to listen to the music, rather than really offer a clear definition of what to expect when we pop the CD into our stereo. We’ve become a culture that relies on Christian books, CDs, t-shirts and other merchandise to help make us holy, and so buying Christian music just seems more godly. Rather than examine art for its creative and artistic qualities and be challenged by the exploration of life, death, faith, and yes, even doubt, we look for the Jesus fish stamp of approval so we don’t have to think about it.

Unless, of course, we’re talking about Amy Grant. You know you’re a Christian music fan if you’ve never gotten over her divorce.

If you liked this article, check out: Christian Music: Making Money Off of Jesus

Award-winning freelance writer and columnist Joanne Brokaw is the Christian music blogger at Beliefnet.com and also pens a monthly humor column for the Christian Voice Magazine. You can learn more about her at www.joannebrokaw.com.