I can relate to the prodigal son. I have had my fair share of selfish pursuits for lovers far less wild. Abandoning my family, reputation, and sanity in search of the cheap, here-and-now pleasure. Forget the shame it may bring upon myself, my family, my friends and my God. I too have been there.

Deep in the pit of sin, unworthy of forgiveness, honor, respect, love. Falling on my face in utter desperation and disgust because of my sinful nature that has won once again. Instead of hitting the ground, I too am lifted by the distant call of a voice I know so well. Instead of being rejected I am accepted with loving arms by the one I hurt the most. Yes, I can relate to the prodigal son. 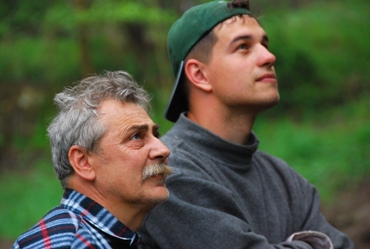 What about the prodigal’s brother. What was his problem? Why couldn’t he just accept his brother with such forgiveness and grace as the father did? Why was he mourning when he should have been rejoicing? Why was he so hardened? So unloving? Here was his chance to display love like never before. Instead of joining in the celebration he sat outside, imprisoned by his own self-loathing thoughts. Maybe he felt unappreciated, unseen by his father? Is it because he was expected to celebrate his brother’s return from failure instead of his faithfulness? Why am I so much like the prodigal’s brother?

In my own family, I have always taken this stance. I was the one who stood by my parents faithfully while my sister and brothers continued to slip away. Bringing hurt, pain, shame upon themselves and our family. Yes, I rejoiced when they returned, but in my heart there was always some form of judgment. Like the prodigal’s brother…I too felt unappreciated for my faithfulness. Why was I not being celebrated like my siblings? How selfish. How prideful. How shameful. Instead of rejoicing, I too was imprisoned by my own self-loathing thoughts.

Is not the church like the prodigal’s brother also? We watch our brothers and sisters in the faith slip away. When they return, we reject them. Judge them. Shun them. They are no longer welcome in our hearts, in our homes, in our family. Once a brother has fallen into divorce, adultery, alcoholism, homelessness…we do not celebrate their return. We feel that only we deserve to be in the pews on Sunday…because we have been there every Sunday.

Here is to the Prodigal Son: Forgive me, Forgive us. Come and let us rejoice in you. You were gone, and now you have returned. I am also like you. I have returned into the loving arms of my Savior. Let me accept you as He has accepted me. You are forgiven. Whatever shame you have caused, whatever burden you carry…you are forgiven. Come alongside me, and let us serve God together. Broken, flawed, but accepted.

Brittany Green is passionate about the glory of her God. She is humbled, challenged and awestruck by His hand in her life and the world around. She hopes to spend the rest of her days with the refugees of Northern Africa.