It was my first Sunday in the bigger kids class. Our family had returned from three years in Europe just in time for me to be promoted the big kids class. We had been back in the US long enough to choose a church, and I had made a couple friends already, but still I was the outsider, and now as an incoming seventh grader into the “teen class” I would stake out the identity I would hold from the next six years of my life.

The text for our study that first morning as we welcomed the newbies into teen issues was Galatians 5:19-21.

I really understood the message of the verse; after all I was raised in the church. God didn’t want me participating in any of the things in this list. I wanted to be liked by God, so I therefore did not want to do any of these things. However I had a problem sitting there in my seat this first Sunday in the teen class, already uncomfortable as the new kid: I did not know what one of these words meant. How could I be liked by God if I was negligently participating in this word of which I had never heard. I raised my hand, waited to be called on and asked, “What is an orgy?” 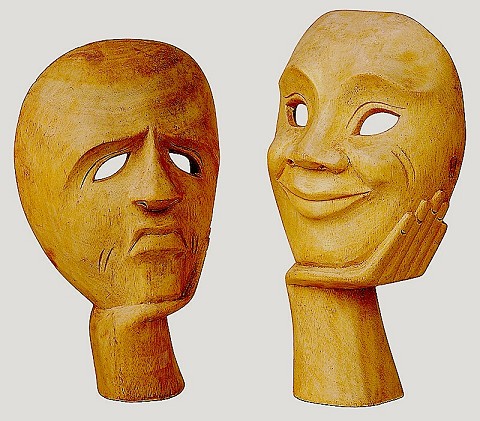 The classroom broke out in raucous laughter. The teacher stumbled over his words for a brief moment then did something I was not expecting in the least, “You can get out.” he shouted at me. Then he raised his voice more, “Wait in the hallway, we’re talking to your parents after class is over. I don’t need a class clown!”

I staked out my identity that day. At 13 years old I established myself as an instigator. I am 33 now, and twenty years later that reputation still follows me around at that church. I would not be a stranger to the hallway over the next six years. Regularly, teachers would send me out there because I would ask questions that seemed so radical to their dogmas that I must be starting something. I was encouraged by teachers and leaders to conform, but I could just never accept the status quo of the church.

Church, to me has been a story of God with dissociative disorder. I was taught about his grace, mercy, life, community, and peace. Yet, I have been abused, ostracized, and embattled over being too radical, too passionate, and too non-sequitur. The attributes claimed of Gods ethereal identity and the practices of these attributes by his physical identity are contrasting opposites.

But for the grace of God, my faith would not have survived a Church upbringing. From my seat in the hallway and onto my life on the fringes of church life I found the physical Christ. God saved my faith by opening my eyes to see the Kingdom in people. I have been blessed to see the Christ in these people who constantly insult my faith and diminish my practices. Often I mourn because that Kingdom is such a dim reflection of what it could be, yet Christ reminds me he is the glimmer that sparkles through the dirty mess that is his church.

Kevin is a dispossessed pilgrim who along with his wife and three children are living in the Chicago suburbs. When not at his “day job” in information technology, Kevin is looking for a crowd of students, teens, or adults to inspire to greater relationship with Christ. He and his family will soon be joining the AIM Swazi base to disciple orphans in Swaziland. at the Nsoko orphan village. Kevin blogs at his website kevinjbowman.com.