ROOV.com is a new faith based social networking site linking up Christians around common interests and passions. Recently, Wrecked sat down with the creators to ask ten questions about who they are, what they do, and how you can get linked up.

Social networking is obviously hot right now. What does ROOV offer its community that the big ones like MySpace and Facebook don’t?

Facebook does what it does very well; no need to reinvent the wheel. Networking sites like Facebook offer their communities the opportunities to connect and stay in touch with their friends online, which is a huge need. ROOV does something different by connecting people in a church and city around shared interests and passions, items of substance that make a difference in every day life. Some users may know each other, others will not. Our hope is that ROOV will connect like minded people that dont know each other and should!

A ROOV is what a user has done, is doing or wants to do – their passions. Users join as many ROOVs as they wish and begin to discuss and gather off line around their common passions. We believe that as users begin to congregate around these shared experiences, not only will true community begin to develop naturally, but the disconnect within the church as a whole will also lessen.

The goal of ROOV is to connect Christians who follow the Apostolic Creed.

How does ROOV facilitate community in the digital world?

Our generation loves technology. Being so connected virtually offers a lot of benefits, but at the same time virtual friendships cant be substituted for real life community. 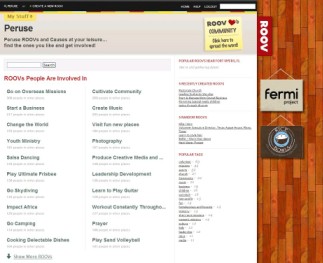 Our goal is to use the technology that is out there and that our world is looking for to actively engage people in conversations that are specifically built around common interests and passions.

How does ROOV facilitate face-to-face community?

ROOV has a Gathering function that brings people together around the things that they love (overseas missions, playing ultimate Frisbee, camping, do inner city outreach, etc.). Once conversations start, gatherings naturally develop.

There’s an approval process for ROOV. Is this for safety issues?

What are some examples of ROOV groups?

Applications. You either love ’em or hate ’em. Does ROOV have any cool applications like the ability to donate a virtual double-fudge-mint-with-sprinkles ice-cream cone to your neighbor’s virtual pet?

We don’t have any superpokes or anything like that. We think that some other sites out there have done a good job at getting us what we want or dont want. Well see what the future holds for ROOV.

How many people are currently involved in the ROOV network?

There are a little over 5,000 currently involved in ROOV.

What are some specific ways you’ve seen ROOV gatherings positively impact their communities?

There are so many to talk about… The Impact Africa ROOV put together an event that raised several thousand dollars for a ministry that works with widows in Uganda. The Inner City Outreach ROOV frequently has gatherings where ROOVers are getting together to serve. The Play Poker ROOV gathered around 50 people for a huge poker tournament that raised money for a microfinance projects overseas. The Ultimate Frisbee ROOV has weekly gatherings for games which has built community in local churches.

What’s on the horizon for ROOV?

There are several things in the works and we are definitely excited to see where it will take us!

For more on how to get involved with ROOV, check out Roov.com.

If you liked this article, check out: Trust Your Ropes: Choosing community when youd rather go it alone

Mariah has currently landed herself in Tucson, Arizona, where she just finished a philosophy degree. She enjoys writing almost as much as she enjoys making music. Almost. You can listen to her music on MySpace.