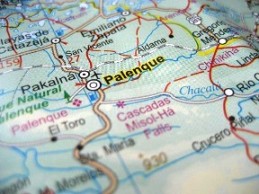 The Chol are an indigenous tribe native to these southern parts of Mexico. The Maya’s main territory was here in Palenque until 600 AD when they split apart into different areas of Mexico and Guatemala. They then divided into several different tribes, the Chol being one.

The Centro Cristiano Maranatha church and community invited our entire group of over fifty to attend a service  and fiesta last Sunday morning. We piled into four mini-buses, then climbed an uneasy road that wound high into the untamed mountains.

To my right, I saw the locals selling handmade crafts and clothing. The delicious fresh fruit piled high in their baskets made my mouth water. Turning to the left my heart fluttered when I saw a sign that read, “You are entering Zapatista Controlled Area.”

The Zapatista were the unmerciful rebels of the land, fueled by the Catholic Church. Mexico once boasted in being practically one hundred percent Catholic; then, 20 million of those broke free from a spirit of religion and embraced the freedom of a relationship with Jesus Christ. Frightened that this movement would destroy their religion, certain sects within the Catholic Church turned to the Zapatista.

We arrived to a large crowd of local onlookers. Who were we white missionaries pouring into their church and home? We uttered our broken Spanish and embraced our south-of-the-border hermanos. Some responded in Spanish, and others gave us confused looks.

A large quantity of the people there only spoke their native tongue of Chol. When we couldn’t communicate with them through broken Spanish, we just smiled and attempted charades. We mingled for a while; then, Pastor Francisco beckoned us into the service.

Small in size, the church only fit half the people standing outside. They insisted our group sit in the front row of red, blue and green plastic chairs. We immediately recognized some of the worship songs as ones we sing in our churches back home. Some kept pace with them in English while others sang in Spanish. Together, we all worshiped with the Sprit moving in Palenque.

During the service, the Lord spoke a word over the church through the body of believers: Centro Cristiano Maranatha would be a forerunner for the surrounding communities to come to Him. He has called them out as a church that will lead in the freedom of Palenque.

An elderly woman sitting a couple rows behind me, started sobbing at this point. How long had she prayed over her congregation and her family before hearing this Word? How refreshing it must be to a people that have remained steadfast and dedicated to the Lord through such harsh circumstances! The man standing next to me also wept. He held tightly to his wife’s hand, with their son hiding between her legs, as tears fell one after another down his face.

God is doing a great work through Centro Cristiano Maranatha. He has commissioned their Pastor, Francisco, as a ‘father to the surrounding region of Chiapas.’ He has made the church a light that will reveal to his people the pathway to him. He is providing for, protecting and guiding them. We serve a God who delights in moving where He is sought… and that little church is seeking.