Before we launch into a review of Death by Church, I should give you some interesting back story. The book was released on the first day of the new year and at the time, I was visiting family back home in Oregon. Intent on getting my hands on Erre’s latest book as soon as possible, my brother-in-law was commissioned to retrieve it from one of the local Christian bookstores. 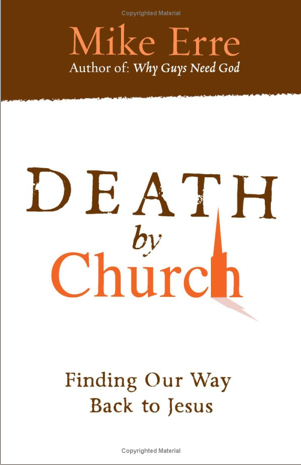 After a short time of confusion on the part of the bookstore clerk, it came out that the book was not going to be carried in their stores…by request. A local pastor had petitioned the local Christian bookstores and asked them to not carry the book, a request that the bookstores seemed content to honor.

Now, it is not surprising that a book could get banned in a Christian bookstore, but what is surprising is that Erre was banned ahead of authors like Rob Bell and Brian McLaren authors who tend to be far more controversial (though, I might add, equally good).

So, before we say anything else, we have to say that if a book can get banned from a Christian bookstore ahead of the likes of Bell and McClaren, it must be good!

Alright, now on to the book.

It seems like there are plenty of books out right now that are all echoing the same sentiment: something is deeply wrong with the church today. In that sense, Death by Church is no different. Where Erre does stand out from the rest, however, is his identification of the problem. It is not the liberal media, the Hollywood-ization of our culture, or anything “out there.” It is that, as the church, we’ve lost our unique identity.

Instead, we’ve continued in the consumerist mindset that we’ve grown so accustomed to not just as individuals consuming church resources, books, sermons and programs, but corporately as well. It seems as if in order for church to be considered a viable option in today’s world, we have to play the world’s games – offering attractive services, efficient and well-marketed programs, and talented performers, too. The problem comes when we realize that by playing the consumerism game we end up reinforcing the very problem we strive against. We’re decrying the consumerism of the culture around us all the while perpetuating and participating in the same. We are like fish in the water, unaware of the possibility for an alternate reality.

Our hypocrisy, it seems, runs deeper than we thought.

The foundation for all of this madness, according to Erre, comes from a misunderstanding of our own identity and purpose. We, like the Israelites before us, have mistaken the intent and meaning of God’s call upon our lives. The church is not, despite the painful blow it deals to us, the point of God’s work in this world. Yet we certainly live as if it is. How many resources are spent by church leaders and participants trying to get people in, to grow bigger, more successful, more influential, with better programs, experiences and services? We might never express it this way, but our actions communicate the truth–we believe the goal of God’s work in this world is the church and so we throw resources at whatever initiatives might bring people in.

This lies in stark contrast to the message of Jesus and the teachings of his earliest followers teachings, it should be noted, that literally changed the world. Shouldn’t we stop to analyze ourselves, then, when it seems that our message and our teachings – whether explicit through sermons, books, etc. or implicit in the way we conduct our services, the type of language we use, etc. – seem to be fading increasingly into irrelevance or worse, making us more comfortable?

Needless to say, this book is chock full of not only a needed and accurate theological treatise of the message and purpose of Jesus’ ministry, but creative exploration of what it might look like for the church to embody this message in the midst of 21st century American life. The prophetic voice with which Erre speaks does not tip-toe around the truth of the matter; he has no interest in sugar-coating the reality of the problems which we face. But amidst his brutal honesty are the promises of hope being revealed even here and now a hope that we are invited and equipped to participate in as God’s people.

This book will prove to be an additional voice to the growing movement within the church of the need for a purpose deeper than just growing our churches with individual souls who consume the products we produce. This purpose is quickly being found through an exploration of this misunderstood term: the Kingdom of God. More than a term, though, the Kingdom of God is a present reality and the good news is that we have a part to play.

If you liked this article, check out: I’m Done With Playing Church

Jesse is currently on a journey of re-learning what it means to be a disciple and it is both invigorating and terrifying.  He studied to be a pastor at Vanguard University of Southern California and hopes to use this degree sometime soon.  Currently, he lives in Colorado with his wife, Cassie and two abnormal pets: Ace (dog) and Lola (cat).