I once heard a report about an explorer who advertised for his trip through a poster listing several reasons why people shouldn’t want to join him. Among them was the key point that they would most likely die. His method of advertising was rooted in a belief that at the very core of humanity is the desire to be challenged to live beyond mediocrity and comfort. And he was right. He was overwhelmed with people wanting to join his team. 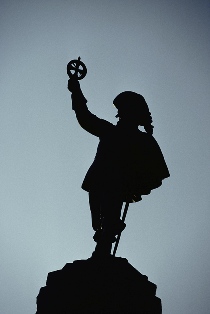 I look at the church in America in general and wonder if we have adopted the opposite of the stance this explorer took. I worry that we have swallowed the mindset of this culture, telling us to live as securely and comfortably, to never sacrifice and to live above our means. I have heard discussions on reaching a “postmodern” generation numerous times, and I have watched many of the methods designed with a cringing alarm.

I would love nothing more than to sit down with a few church leaders and have a heartfelt discussion concerning these methods. I don’t want to convey hatred for church, or even for structure. I realize the hearts of many of these individuals are genuine and I have no desire to overthrow the system like a rabid youth.

What I would like to say is that I wish they made it harder for me to claim the title, “follower of Christ”. I wish I heard more about sacrifice and saw less video clips and power point presentations. I wish I heard more sermons with actual scripture as the basis for the message, rather than a book, sitcom, cartoon or idea that has spawned from the latest movie trilogy. I wish we sang more songs that require my brain to become engaged in viewpoints of God and faith that go beyond the general concepts of passive acceptance.

I have spent the majority of my life accosted by society’s attempts to manipulate me. I can see through light shows, flashy presentations and sales pitches with ease, and my cynicism abounds. Which is why cheesy graphics on a screen create an automatic distaste and the immediate reaction to shut off whatever is about to be presented to me. I am desperate to hear those who tell me that to live out the faith of Christ will require my death. Those who will say “many are called but few are chosen”, unaccompanied by lights and laser shows. Those who believe that the clear and concise truth of a gospel, that was and still is offensive to many, can stand on its own.

I believe I am part of a generation that is becoming increasingly aware of what we are inheriting and that we are destined to play a larger part than we have in the past. I see a generation slowly beginning to respond to the call of social justice. We are noticing the articles calling our attention to places as far as the Sudan, or the struggle of the AIDS crisis and are also becoming increasingly aware of the poverty and debt that has laced its way across our own nation.

And I believe I am a part of a generation that experiences great confusion over why a church would decide to spend 10,000 dollars on a new spotlight for the sanctuary, when there are hundreds of needs that seem more important right outside the door.

I am desperate to be a part of body that will hardly notice if we meet in a shack as long as we are challenged with the words of Christ urging us to “gain what we cannot lose” and to look after the poor, the orphaned and the widowed. I am desperate to engage in tangible warfare as much as spiritual warfare against the evil that is crippling this world, by acknowledging that the truth of Christ and a cup of cold water are stronger tools than any methods I can devise.

I am not declaring methods to be wrong, nor am I attacking the leaders who utilize them. I am simply wondering if we believe our faith can stand without the use of these methods. I am intrigued, astounded and inspired by the life of a man who only had to say two words, “follow me,” with the result of twelve men giving up everything to do so. And they dropped it all without being given an explanation, promise, or security.

His power went deeper than presentation or even words, and I have to ponder the idea that truth without fanfare is the only thing capable of commanding the attention of a world saturated in manipulation and commercialism. And with that I realize the explorer I heard about wasn’t the first to understand the depth of man’s cry to truly live, even at the risk of death and the loss of all security. It was and is the message of Christ, and it is still commanding the attention of men today.

This was originally published by our friends at Relevant Magazine.

If you liked this article, check out: Christians Defined by Stances?