Perhaps an orphan in Africa would not seem like the most likely candidate to speak to the power of togetherness. Disease, poverty, and death do not seem like features of community. Yet, the places where pain exists in its most dire form are the places in which the need for community is highlighted most authentically. The documentary We Are Together (Palm Pictures) is the stirring story of community and hope in the most desperate of circumstances. 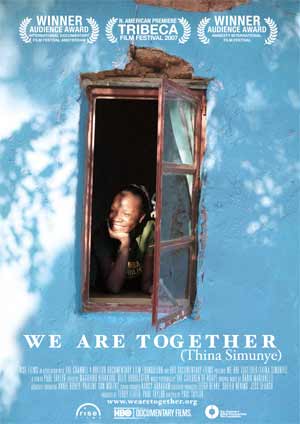 Tracing a span of three years, this feature chronicles a group of orphans at the Agape Orphanage. Music is a big part of the culture within the orphanage, as they practice regularly after school as a choir. Holding closely to traditional currents of their musical heritage, their love of music is perhaps one of purest expressions available in this industry-soaked world. Drawing on their strengths, these kids and the facilitators of the orphanage decide to use their music as a means to raise money to expand the orphanage.

This film is one of the results.

Promoted in conjunction with Bono’s ONE campaign and Alicia Keys’ Keep a Child Alive foundation, the film We Are Together was also featured on HBO in early August. Its available for purchase online, with a portion of the proceeds directly benefiting the children at Agape.

But since the whole story and project is about community, the people involved wanted to provide more of an opportunity to come together than just writing a check. So, We Are Together is launching a choir competition to bring together music groups in an effort to raise awareness and solidarity with the Agape Orphanage. Any non-professional choir or group is eligible to submit their own version of the films title song We Are Together before December 15th to compete for a Palm Pictures music library and other prizes.

The first five groups to compete will also be featured on HBO’s website.

It seems only fitting that the solution for a hurting community resides in the community itself. As the children in Agape looked inward, they found strength and something to offer each other as well as the world around them. The film and the choir competition are a chance for different communities to join together and celebrate hope on a larger scale than an isolated community.

To learn more about being a part of this community, visit: www.wearetogether.org.