Before picking up Young, Restless, Reformed, I thought a Calvinist was someone who enjoyed Bill Wattersons Calvin and Hobbes comic strip. The names Jonathan Edwards, John Piper, even John Calvin himself were people that I had not been exposed to before cracking the spine of this 160-page paperback. I tell you this to establish my ignorance of Calvinism. Allow me to apologize in advance. 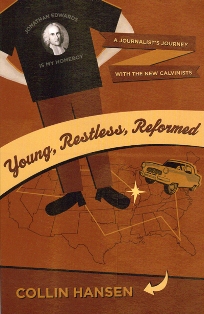 Let this review of Collin Hansens novel not fall into a judgment of Calvinism as a belief system either, simply a review of the written novel presented below. What Mr. Hansen has achieved is a two-years-in-the-making roadmap of reformed theology spreading across America. Being a young person myself, I was excited to understand more about this reformation that was taking hold in young people.

I found the book to be both easy to read and difficult to follow. Mr. Hansen spends a lot of time quoting and referencing other material, including a number of other books, to enhance his subjects throughout Young, Restless, Reformed. Having not read any of them, I found myself wanting, and feeling a little left out of the loop. After multiple references to the same titles, I wondered if I shouldnt have had a preliminary reading list provided before starting.

The names of Piper and Edwards and Calvin may be familiar with those involved in a Calvinist or Reformed movement, but as an outsider, I found a lack of concise summary of who these key people were, and why they would be important throughout the book, disappointing. Their stories and histories are spread throughout the book, interspersed as necessary in each chapter. All in all, with all the people interviewed, quoted, and discussed, I would lose track of the cast of characters. Add a heavy dose of conferences, sermons, and historical data, and I was often left overwhelmed, reading the information but not absorbing it.

Which was a shame for me. Fundamentally, this book is about a movement of people that want to realize a biblical based relationship with God, moving from the milk of evangelical programs to the meat of something more. Hansen captures that feeling with prose like this sample, from the first chapter, “Born Again Again”:

Maybe you can only survive so long on a self-help diet. Eventually you get pretty sick of yourself. A biblical understanding of God big beyond description, active, perfectly holy tastes much better than junk food pop psychology. Imagine that this transcendent God still condescended to save his disobedient people. Because he so loved the world, this God of the universe dressed in flesh and suffered on the cross. Yet he did not stay in that tomb. The power of God raised Jesus Christ, who made a way for us to dwell in the house of the Lord forever if we only believe. Transcendent, yet immanent, he transforms us, and then employs us in transforming the world to renew his creation. For students at Passion, the biblical picture of God feels new, appealing, and exciting. (p 20-21)

Mr. Hansen is eloquent in his descriptive narrative, and doesnt hide the checkered past of the Calvinist history. His thesis on this revival is told through those he interviews, allowing them to tell their story in passionate ways. It is this passion for a God-centered doctrine that had my heart on fire, wishing more time was spent on the practical real growth of this movement and less on why John Calvin was kicked out of church in the 1500s. Pointing fingers at one religion or another was a real turn off. Showing Gods growth in the many young people was far more sympathetic to the reformed movement than rehashing timeless debates between Calvinists, Arminians, Protestants, or Baptists.

In the end, I felt uplifted but it wasnt without effort. I believe that if you have a reformed background, or knowledge of this movement, Young, Restless, Reformed can be a good read and a source of direction from a historical perspective towards tomorrows church. Id be curious how those who have read the book, and follow the doctrines of Calvinism, feel about the material presented by Mr. Hansen. For me, and my completely subjective opinion, the book failed to sustain the passion that it presents as the future of reformation.

About the author: Collin Hansen is editor-at-large for Christianity Today. His early response to The Da Vinci Code is among the most-read articles in the history of Christianity Today International. He has also written for Books & Culture, Leadership, and Christian History & Biography, and he contributed to The Leadership Secrets of Billy Graham.

Jody thinks he is more Calvin than Hobbes. A father of two from Canada, Jody works as a producer and on-air video host for a local newspaper website, Eh?