I saw this article in Telegraph the other day: 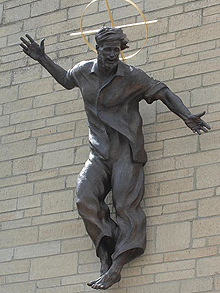 Cornish’s sculpture was funded by money left by Winifred Gregory, 87, a member of the congregation who passed away last year.

Christ is wearing jeans and a shirt billowing in the wind while his hair and beard are neatly and fashionably trimmed.

Father Buckley said: “You are always looking for new ways to enrich people in the experience of Christianity and it is good people can be open-minded to appreciate it.

“On the continent you often encounter modern representations of Jesus but it is not so common over here. We wanted a figure of Christ not in suffering but dynamic and welcoming.

“We felt this design summed up the spirit and activity of Christ perfectly and I think it speaks for itself.

This reminds me of when I studied abroad in Spain one semester in college. My friends and I were traveling via train and had a 12-hour layover in Barcelona. We bought some bread and cheese and hung out in the square for the afternoon. There, our quiet respite was disrupted by a loud, obnoxious evangelist and his drama team who were telling the crowd that they were going to burn in hell if they didn’t receive Christ right then and there. I was young, naive, and pretty jaded, but even now I look back to that event and believe, as I did then, that there has to be a better way.

It’s certainly clear that the church is in need of some new publicity in places like Western Europe where traditional Christianity is all but dead, but is a Jesus makeover the way to go? Does slapping some denim on him with a button fly do the trick?

According to Matthew Paul Turner, former CCM editor and Christian culture provocateur, Jesus needs new PR (check out his blog, if you don’t believe me, or read his latest tongue-in-cheek book Churched).

If you ask Shane Hipps, however, the medium is the message, and Christians need to think twice before hopping onto the technological bandwagon (and dragging the Gospel with them).

What do you think? Can the image of Jesus be updated and made a little bit more “relevant” or hip without losing the sacredness of it?

Is Jesus really my homeboy?