She’s an elderly woman, probably in her mid-sixties. The sun has made its mark on her face, with lines encircling her brown-hazed eyes. She’s a follower of Islam, careful to read her Koran and pray the regular five times a day. And she is a woman seeking truth. Just 24 hours before I met her, she prayed out to her God for Him to show her truth. Not interested in the religious routines as much as the truth of a real God, she began asking Him questions.

And there, He met her… 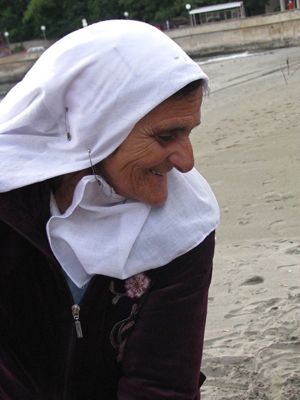 Her name is Fetija and she lives in Montenegro, a country of 700,000 with roughly 200 Christians in the entire nation. In Ulcinj, the city in which I came to meet her, you cannot make it through your day without hearing at least one of over 10 mosques in the city doing their regular calls to prayer. The noise vibrates throughout the city, invading every ounce of air, so that it is all but impossible to ignore.

Fetija and I met on a Sunday morning. The sun was brilliantly shining, and it was time to take church to the beach. With only five believers in the city of Ulcinj, there is no organized church meeting, so my group (there were nine of us) headed to the beach with Bible and guitar in hand.

The first person I saw as we approached the beach was Fetija. She was lying on the sand beside some lounge chairs. The minute we walked towards her, she perked up and started waving with this beautifully radiant smile on her face. It was irresistible to pass by, so I went over to her and waved back. She instantly pulled me close, gave me a huge hug, and held my hand. We stayed like that for a few minutes, just smiling, laughing, and holding hands.  I would say things to her like, “Jesus loves you” and, “You are a beautiful woman of God.”  I knew she didn’t understand, but I also knew she needed those words spoken over her, despite language differences.

After a few minutes, I left her and went back to the group to begin worship. Just the night before, we had done an all-night prayer time for the country of Montenegro. While physically we were definitely tired, spiritually we were refreshed and energized, knowing God was moving in this country. In between prayer or songs, I would look over and there Fetija was, grinning ear-to-ear, waving. You couldn’t ignore the joy of this woman; something irresistible was in her.

After we finished singing, I taught for a short while on what it means to walk in both thanksgiving for what God has given us, and declaration for what He is doing. One of the questions I asked the group during that time was how big God had to move in order for us to move from a petitioning prayer position to a declaring position on something we were praying into. Specifically, how big does God have to show His movement in the nation of Montenegro to take us from asking Him to change the country, to declaring that the country is transforming in this moment?

We finished worship and began eating lunch. The next moments were a blur, but I remember sitting on a lounge chair with my lunch in hand and feeling quickly compelled to go bring the rest to Fetija. Over I went, handing her half my lunch, and sitting down with her. We just smiled, laughed, and kept on holding hands. 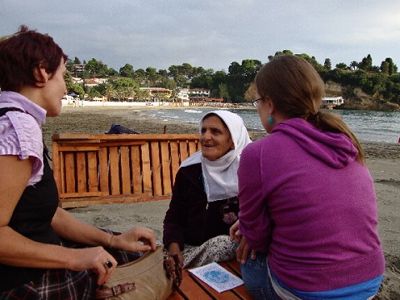 There were three of us girls who sat with her on the beach. Despite knowing she couldn’t understand what I was saying, I just began talking to her. I asked her about Jesus if she knew Him, if she prayed to Him, if she knew how much He loved her. She just smiled and held my hand.

I was about ready to get up and give her a hug goodbye when I saw a figure walking over towards us. Instantly, I recognized the woman as Bukurija, a missionary with whom we were staying in Montenegro. She bee-lined it for the group of Fetija and us girls. I was so relieved to see her, knowing she would be able to help translate for us. The minute she got over there, she sat down next to me: “Caroline, I got here as quickly as I could. I was getting dressed and about to fix lunch when I heard the Holy Spirit tell me I needed to come right to the beach to help you guys share the Gospel. So here I am.”

Bukarija is not an ordinary women. Almost 40, she’s a Hungarian missionary who is now dedicating her life to the people of Montenegro. Despite not seeing rapid fruit, she’s choosing the road less traveled by missionaries a road of sacrifice, pain, patience, and pursuing the glorious redemption. She’s a woman who is completely led by the Spirit and voice of God.

Fetija instantly took to Bukarija, as most people would. The minute Bukarija sat down, the two women started talking in Serbian, while I sat peacefully beside them, smiling at what God was doing. I was sure of one thing this was so much bigger than one conversation. God was showing Himself moving in this nation through this one divinely-appointed conversation. As they chatted, I sat and waited, knowing that He was changing this woman right before our eyes.

When they were done with introductions and casual conversation, I asked Bukarija if she would ask Fetiga about faith and where her hope comes from. Fetiga said she believes in Allah and that she is careful to pray regularly and seek Him out. She said it was her duty to be faithful to what He has asked of her.

Not being one to beat around the bush, I told her about Jesus. I told her that He is the one who not only sacrificed Himself for us out of love, but who conquered death through resurrection and wants an intimate relationship with us.  That He is the Way, the Truth, the Life. And that He’s pursuing her in this moment so that she might know Him intimately. She stared me straight in the eyes and listened. She started hearing it.

She began telling us that just yesterday she was praying for truth. She was asking God to reveal Himself as He is and not as people have told her. Today, she said, she wasn’t meant to even come to the beach. Rarely does she come because of how far it is from her home, but she got up in the morning and decided to make the trek. And now here she was, sitting with us Americans, knowing it was not by accident.

As we continued talking, I shared with her that it was all about the relationship with Christ and not the religion. With everything shared, she was eager to hear more. She started wanting it, believing it, and was ready to choose it. We told her to pray for herself and ask Him into her life on her own. We didn’t want her to think that us Americans had any special power in this matter.  And the last thing we wanted was for her prayer to become another ritual to her that secured her salvation, but never affected her heart’s cry.

This time wasn’t about converting Fetiga simply to make us feel like we had done our duty as believers. It was about pointing her to the face of truth and letting her begin her journey of getting to know who He is and what He promises.  Bukarija pulled out a New Testament in Fetiga’s language so she could start reading it for herself. When we handed it to her, she was hesitant in taking it. She told us that she has terrible eyesight and didn’t know if she would be able to read the small writing. Quickly, we told her that not only is God a God who saves, but He is also one who heals today. And with that, we laid our hands on her eyes and prayed healing into them right then and there.

When we ended our conversation two hours later, I gave her a big hug and kiss. There is not a doubt in my mind that Fetiga found her truth that day, that she met her true God.
Everything fit divinely together that day. After a whole night of asking for God to move in this nation, He showed Himself so clearly to us. It was a moment of promise that He is moving and bringing His people back to Him in this country.

When we walk with eyes to see the unseen, all of a sudden one conversation can become a moment of loud declaration that change has come and Christ is there.

Caroline grew up in Connecticut in a small town. As a Junior in high school she was invited by a friend to Young Life club, where she heard the Gospel for the first time. That night, she committed her life to Jesus, and life has never been the same. She recently finished traveling on the World Race, an 11-month mission trip around the world. You can follow her blog here.