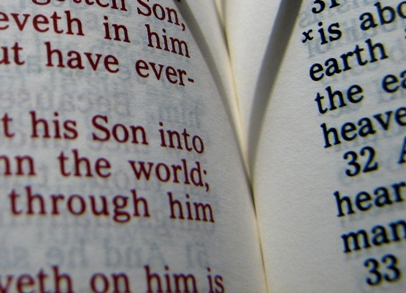 I read the bible. I read Jesus words – the red letters that I so often hide from. There is this desire to retreat and to hide under the covers, because if I truly followed what Jesus said, I would probably need my head checked. Life would look so radical. No mature Christian would ever advise me to actually follow Jesus. That life is complete foolishness.

Then I read that Jesus calls for followers. I see what he expects from those who claim to follow him – to lay down our lives. To serve. To hurt. I wonder how we claim to know him, but our lives dont reflect it. Wouldnt following Jesus change everything? Why do people claim to follow Jesus, but their lives look the same as those that dont. Wouldnt my life look like the life of a man who claimed to be the chief sinner?

In the book The Final Quest, by Rick Joyner, Joyner writes about a conversation in a vision he had. Joyner spoke to Paul, and Paul shares some of his own regrets. When Paul called himself the chief sinner, he wasnt joking. I think I tend to clean that up – chief sinner, thorn in his side – surely that is not literal. We are talking about PAUL! Shipwrecks, beatings, hunger and prison. When Paul got stoned, it was different than when I used to get stoned, and even now walking down an alley in Cusco, when a man asks if I am looking for Ganja, and half of me says yes. Paul totally seems to have been focused on fighting the fight, but Joyner says in this vision Paul has regrets. Paul sees in his own life where he would have done it different, if he had a second chance.

Then I think, why are there not more of us out here? Even with our failures and doubts, is this not worth pursuing? When God fails me, I am off the hook. But as long as God proves himself faithful, even with my faulty perceptions, shouldnt I continue to pursue a life that looks more radical every day? Why dont more people come to this conclusion?

As I speak to people who make no claims on Jesus, I see that Christianity is responsible for so many issues. It is a religion that enslaves others. It is a religion that makes life more difficult. It multiplies confusion, guilt, and shame. It uses big wordsused to impress: sanctification, justification. Words that choke me. Words used to exclude others. Words used in a conversation to intimidate a listener; to validate the speaker. Words I cant imagine Jesus using unless he was standing before the Pharisees.

As I hear someone say that they dont understand the gospel because of lack of education, I wonder how a carpenter and some fishermen stump the wisdom of the wise. I wonder how the wisdom of armchair theologians and highly trained religious types have brought death to so many. It is a religion that can barely be spoken, never mind lived, to people that are struggling to patch the holes in their clothes.

I have come to the conclusion that so many Christians have not heard the call to missions for more reasons than my past assumptions. For so long, I assumed most Christians dont believe in cross cultural missions simply because they truly dont care (turn the channel when World Vision shows another baby starving or a child eating dirt). They are scared. Dont have faith. Dont read the bible. A long list, including selfishness and laziness. Or I assumed people honestly dont know Gods voice. Dont bother to listen.

After this month, I have become convinced that some Christians simply are not called by God to missions because God doesnt want their religion to spread.

Scott Molgard , of Wilmington, MA, has left his career as a personal trainer to travel the world with his wife, Linnea. You can follow his adventure here.