What do you see when you look at this picture? Obviously there are four feet, two from an adult and two precious little ones from a toddler.

I bet that you would never see or assume the truth behind this image, this haunting picture. The two little feet that you see were just sold for $60 US Dollars to a pimp.

Welcome to Navotos, where Michael lives. Navotos is a community of 10,000 people who live on top of tombs in a graveyard in the Philippines. Michael lives in the part of the community that is raised about 12 feet off Manila Bay’s polluted waters. 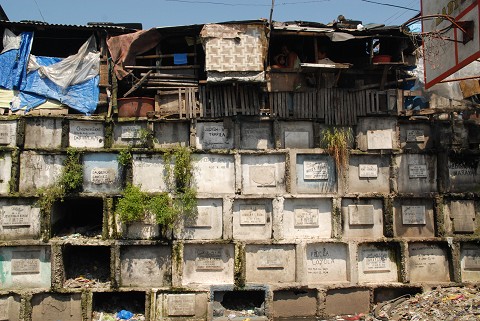 All nine of his family members live in a two-story makeshift squatter home.  Most of the bottom level is rotted out and can’t be used.

You reach the top floor by climbing a slippery ladder, and once you get up to the top, you realize that this family literally has nothing.

Each child has one shirt. Some don’t even have pants. One baby’s bottom is diaper-less, and the severe rash has bubbled his skin over to look like a think crust.

Michael spends all day alone in the house with the baby and his other two-year old brother while his father and mother go out to try to find work so that they can eat.  His older siblings are left to govern themselves and find work.

When the pimp came to the door with a picture in her hand, the family thought that their luck had changed. She promised them that by giving Michael to her they would become rich.

She said, “At the age of 20, Michael will come back to you with a million dollars, and you will not have to struggle like this anymore.” She also promised that Michael would be taken care of and treated like a king at his new home in Japan.

Our partner ministry has two schools: one in the dump and the other in the graveyard. One of the teachers found out about Michael Angelo and notified the social work department at the school. Three of the social workers decided, despite how scared they were, that they were going to do something about this tragedy.

They worked tirelessly to find out all the details. They discovered that the pimp worked for a couple who lived and owned a bar in Japan. They also sold children undercover.

The pimp became pregnant herself about four years ago, and it was decided by her boss that she would pimp out her own child when he was around three years old.  The time had come for her to give up her son, but she could not bring herself to do it. She took a picture of her son around the Navotos village to find a child that looked like her son.

When she found Michael Angelo, she found a way to save her own flesh and blood.

The social workers called the mother into the school, sat her down and scared her to death. They told her that the adoption was illegal and that she could be put in jail if she didn’t get the child back. The conversation took hours before tears streamed down her eyes, because she realized that her child would be used for sexual pleasure by a man four times his size. They said that it took her about another hour to find the courage to go to the pimp’s house to retrieve her son.

On June 15, 2008 at 12:00am, mere hours before the child was scheduled to leave the country and fly to Japan, Michael Angelo was back in her arms. I asked the social worker, “Do you think she will sell him again?”

She shrugged her shoulders and said, “We will notify the police to arrest her if she does. She is still thinking about that million dollars.”

Last week, I had the pleasure of photographing Michael Angelo.  He didn’t smile too much.  Perhaps the shock of a white woman with a huge camera and lens planted right on him was a little shocking.

His face was severely bruised, because he had fallen through one of the cracks in the floor. The dark color around his lips is not chocolate; it is dried blood. I don’t know how he survived a 12-foot fall. It’s as if the Lord’s hand is on this child.

When I left the rickety house, I turned back and saw his little head peaking out of a make-shift  window.

Through his swollen check and black eye, he surprised me with a smile that radiated joy into my entire body. In the frozenness of this scared child, I saw a glimmer of hope. He waved his tiny little hand frantically from side to side in such excitement as he sent me off with joyful goodbye.

I stopped by the house one more time before leaving to see if I could find the mother and tell her that there was no million dollars, but we couldn’t find her anywhere. Michael was alone in the house with his two other siblings.

This time, I captured his little head peaking out so that you will remember him.

Remember his bruises and his face. Remember that he was sold and then saved.

Remember him, pray for him, and join others in the work of getting children like him out of danger and back into the Father’s arms.

Marisa is from Kenosha, WI, and is spending this year on the World Race, an 11-month mission trip around the world.