The other week, I met a friend for dinner. During the course of our meal, we discussed all kinds of issues from theology to social justice. We lamented the state of the church with critical attitudes and admitted that we ourselves were part of the problem. 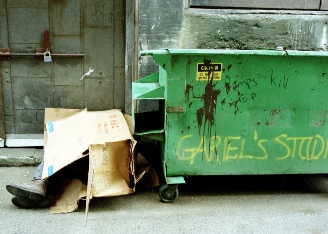 We both expressed desires to have a close-knit fellowship group with which we could really run, throwing off the shackles of fast faith and cheap grace, embracing the radical devotion to which Jesus calls all his followers.

Thomas was a kid who had spent his precious youth on the streets of Nashville and had wasted his body on drugs. His health was in serious trouble, he smoked, and there was a scratchiness to his voice.
Yet, he was smiling from ear to ear, and there was hope in his demeanor. Two weeks ago, he left it all, walking fifteen miles to Franklin and found a job at this very restaurant where my friend and I were eating. He said that he “just got tired” of it all.

Another friend introduced me to Thomas that night and told me the story, how she prayed for this young man two weeks ago, when she saw him on the street.

Not more than a few days ago, she saw the answer to her prayers and could only say to him, “God is pursuing you, and that’s awesome.”

Trying to digest all of this, I leaned over to my friend and said, “Now, that’s redemption.”

Neither of us had a whole lot to say after that.