I recently bought a book by Danny Wallace, the original “Yes Man.” It’s called Random Acts of Kindness and is a lot funnier than it sounds. It is jammed-pack with stories and tips about how to make the world a better place, and  put a smile on your own face while you’re at it. 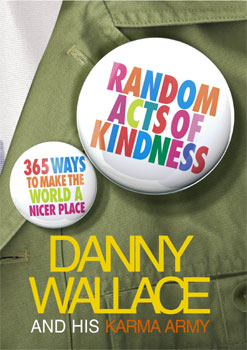 Give someone a massage, it suggests, but check with them first; otherwise, you may be up for assault. Hail a cab and give the cabbie a packet of peanuts. Change your voice mail message so that it starts with the line, “You look good, have you been working out?” That kind of thing.

It also suggests buying crisps from a vending machine and leaving them in there for the next person who comes along, and placing change in phone booths for the next caller. The introduction, by the way, is entitled, “Welcome to Karmageddon.”
I’ll stop there before this whole thing starts turning into a book review.

This is all nave stuff – but there’s a difference – you’re doing it knowingly. There’s a big distinction between being deliberately nave and just being nave. Jesus understood that, and he encouraged this kind of naivety. “Don’t be like Mr Creosote,” he says, “the rich idiot who went into a restaurant and stuffed himself so full that the final waffer-thin mint caused him to explode, showering everyone with blood and guts. Better to share what you have.”

Jesus pauses for effect then goes on, “because the alternative might kill you. Worrying about protecting all you’ve acquired can give you a heart attack.” Luke wrote it down in his blog, the chapter imaginatively entitled 12. “There are other ways to get rich,” says Jesus.

On another day he quotes a well-known saying, “Don’t have the evil eye, it’s bad for you.” In other words – don’t be mean. Instead, Buy the drinks. Get that copy of the big issue. It’s good for your whole being. If your eye is good, your whole body will be hunky dory.

I met a guy recently who told me why his grandfather had become a priest. He had watched another priest push a washer-woman’s cart, loaded with dirty clothes, up a steep hill. The man of the cloth put his shoulder to the cart and helped the struggling woman, even though she never turned to look and had no idea anyone was giving her a hand.

At the top of the hill, the priest straightened up and went on his way without a word, presumably thinking no one would ever know what he’d done. My friend’s grandfather had seen it all though and thought, “I want to be like that.” A few years later, still inspired, he went on to become a priest. Sometimes, the little things change the world. A dread-locked prophet named Shane Claiborne once said something along those lines: “Get ready,” he said, “cause God is preparing you, for something very, very… small.”

There are two things that Jesus imagined in his radical view of life. First, the kingdom of God is not just this place you go to when you shuffle of this mortal coil; it’s the realm of God’s order and justice and generosity – another reality, another way of being, and it keeps breaking into our own little worlds.

Second, the prostitutes and tax collectors of his day, those reckoned to be outside of God’s favour, are ahead of people like me in that queue for God’s kingdom. They’re breaking into God’s realm while here I am hanging back.

Danny Wallace’s book is not a Christian one, if books can in fact be at all Christian in any way. It’s just a collection of tales about all kinds of people doing all kinds of good things to make the world a better place. Punching holes in the invisible wall that separates our world from God’s reality. Enabling shafts of divine light to break in. I reckon God would take one look at Danny’s Karma Army and say, “Dave, you’re missing out, mate. You’d better get in that queue, those guys are getting in on the kingdom of God ahead of you. Wake up Dave. Wake up.”

Dave likes loud music, good comedy, great films and Tony Parson’s novels. He finds the Bible hard to read so is dedicating much of his time to retelling it using all kinds of inappropriate things. That’s not his natural hair colour.