I am a white-skinned father with a black-skinned son.

A little over a year ago, my wife, Amy, and I adopted our son, Silas, from Ethiopia.

Today our conversations tend to revolve around our favorite snacks – yogurt and lemon pound cake at Starbucks – and favorite TV characters and movies – Elmo and Ratatouille. We also squabble very little these days. Sometimes Silas will take a swing at me when I take away the Wii joystick. And other times he’ll treat the cheese sandwich I made him for dinner like a Frisbee. 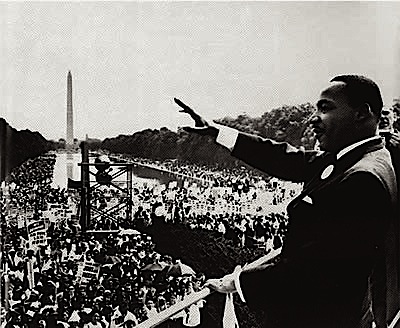 One day, though, Silas will want to talk about other things. Like the color of his skin. And my skin. And his mother’s skin. And pictures and events and people and dates he finds in his history textbook.

There are some historical dates I don’t want to broach with Silas then. August 12th, 1955, for example. That’s the day Emmett Till, a 14 year old boy, was brutally lynched in Mississippi by white, southern, “Christian” men.

Then there is September 15th, 1963. That’s the day when four little girls were killed by a white supremacist bomb at 16th Street Baptist Church in Birmingham, Alabama.

Or April 4th, 1968. That’s the fateful day Dr. King had his hope-filled voice silenced by a sniper’s gun.

But then there are days in America’s history I can’t wait to explain to Silas.

Days like December 1st, 1955, for example. The day when Rosa Parks refused to give up her bus seat to a white man. That small, defiant “no” reverberated out into a large, defiant “no more.”

There are other days, too. Like August 28th, 1963. The day Dr. King delivered his famous message, “I Have a Dream.” It was a day unlike any other day. It was a day of dreaming of another kind of America.

These are dates I look forward to telling Silas about – not as a student of history, but as a participator in making history.

And I will tell Silas this: whether one voted for Obama or not, one could not argue that it was a significant symbolic moment. And a storied moment with deep biblical resonances. From hundreds of years wandering in the wilderness of prejudice and oppression. To now the new days of exploring the “milk and honey” land of equality and opportunity.

Undoubtedly, MLK glimpsed the Promised Land from a distance. Like Moses. Like a dream just beyond his grasp. But Silas, you, and others of your skin color will experience this land as a blessed reality. Like Joshua. And the nation of Israel. I can only pray that this new land for you will shimmer with the topsoil of fresh possibility, and contain in its seedbed the promise of renewed dignity. But, Silas, there are still weeds trying to choke out these verdant seeds. For though the “color line” W.B. Dubois spoke of has been broken in America’s political establishment, it still exists in America’s religious establishment. 95% of the evangelical church, for example, still remains divided along the color line.

Unfortunately, Martin Luther King Jr.’s truism stills rings true today: 11 am on Sunday morning is still the most segregated hour in America. Perhaps, though, Silas, by the time you come of age, that small, subversive 5% of the American church will have grown and spread through the body of Christ like a lush vine.
Voting though won’t bring this change.
Only Spirit-led repentance will.

I can only pray that you discover these seeds pods of repentance bursting within my heart. And your mom’s heart. And your grandparents’ hearts. And in the hearts of all of those who you know that call themselves Christ followers.

I am reminded of observing MLK Day last year. You, your mom, and I celebrated Dr. King’s legacy with our adoption community at the Queen of Sheba, a local Ethiopian restaurant. On that special day, our dear friends, Eric and Tara, received their referral picture from Ethiopia of their soon-to-be-adopted baby boy, Malak. That night we laughed and cried over Malak’s picture, ooing and awing at his large black eyes and his luminous smile.

Later that night as I lay awake in bed and reflected on that festive evening, I couldn’t help but wonder if in fact Dr. King were alive today, would he approve of couples like us and the Silvestres adopting black children. I also thought about how far we have come, from an age of colonialism, where Africans were our slaves, to this new post colonial age, where Africans are now our sons. And I wondered if Dr. King could have even dreamed of such a day when such transformation was possible. Who knows really?

But it makes me wonder if at the Queen of Sheba, if just for a fleeting moment, with our bellies full of freshly baked bread, and sweet Ethiopian wine on our tongues, and with you in our arms, and Malak’s picture in front of our faces, if we did not glimpse even if for a moment, the future community of God, the eschatological days when the old age of hatred and racial division will be truly over, and a new age of love and racial harmony will have begun.

As I closed my eyes to sleep, I suddenly recalled Dr. King’s words spoken days before he was assassinated.

And remembering these words, Silas, I thought to myself, Perhaps the end has already begun.

Josh has been in education as a teacher and administrator of 10 years. He and his wife partner with the orphan ministry Children’s Hope Chest, leading the first online church community sponsoring an orphanage in Ethiopia. They are also in the process of adopting a baby girl from Ethiopia.