On November 15th and 16th, 2007, WCRF 103.3 FM in Cleveland, OH will broadcast live from the street – the corner of West 30th and Lorain in Clevelands Ohio City neighborhood. During the broadcast, the listeners will hear the scope of city ministry – from feeding the hungry to clothing the homeless, from tutoring to teaching English as a second language classes, and more. The purpose is to drive the Church to consider getting involved in city ministry. In this essay, WCRFs Mark Zimmerman talks about how his academic faith turned into active faith.

The street festival was getting more crowded, the rappers were getting louderand all around me were young Latinos and African-Americans who were reacting more than listening to what was happening on the platform. Standing next to me was Pastor Max from Nueva Luz, and we were talking about this neighborhood on Clevelands West Side where it had come from, and where it was going when he caught me by surprise by completely reversing Acts 1.8 on me. 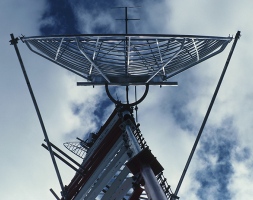 In May of 2006, my oldest daughter was preparing to leave for the summer to be a counselor at her aunt and uncles Bible camp in northern Minnesota. As she was getting ready to go, she handed me a book, and asked me to read it. I said I would.

The book was Shane Claibornes The Irresistible Revolution (Zondervan-2006), and needless to say, once I picked it up it was hard to resist the audacity of this 30-ish country boy from Tennessee who was now in full-time ministry at a “community”of believers known as The Simple Way in the poorest neighborhood in Philadelphia.

I was outside the United States for the first time in November 2003. On my first day in the Dominican Republic, I was standing in the middle of the worst barrio in Santo Domingo. The noise of the motorbikes, the meringue music coming from the speakers in the windows, the cross-street shouted conversations, the smellscooking, sweat, gasoline exhaustand urine. It was an assault on the senses.

Moments before, I had been inside a 10×20 concrete block “home” with no electricity or plumbing where the gutters in the alleyway outside served as the only sewer system for the neighborhood. Now, I was standing in a traffic island as the barrio symphony pounded away at me from all directions, and I remember the only thought at the moment that could find room inside my head: My life has just changed. And I honestly felt it had.

When I returned from the DR in 2003, and from Guatemala in 2005, I told my radio listeners what I saw, what I felt, and what to do about it. I made nice photo presentations and spoke at whatever church would have me about my experiences. But by May 2006, there was an uneasiness in my spirit. I knew Id done good, but I also knew there was more, much more.

Also, check out: It Had Flesh On It: A Day With Shane Claiborne

Mark is from Cleveland, OH and works for WCRF 103.3 FM. For more information on his call to serve the urban poor, check out 1nightonthestreet.org .