At Wrecked we love to highlight what people are doing to re-imagine culture wherever they are. Here is the story of one girl who got wrecked in Uganda and started up a non-profit for girl soldiers and child mothers when she got back:

The sun sets a stream of red over a long horizon above the deserts of Sudan. As I fly over towards Uganda,I feel my heart sense that I am coming closer to home. I have always said God was in sunsets. He is probably in sunrises too if I could ever wake up for them. 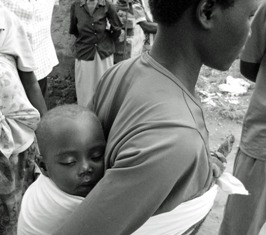 From the air, there is no landscape, just the black shape like a backbone rising out of the African dust. This is Africa. A strong back lit up by the sun. Always breathing, always rising.

I do not know what will become of me here, only that I am drawn here as the wild geese to a warmer spring, the trout who swim upstream, and the wolf to the studded moonlit darkness. There will be many failures but maybe there will be one life utterly transformed, catapulted into redemption. I used to think that I could bring something, that I could save the many, but I think more now that this is about God doing something in me.

Some say God left Africa a long time ago. The tribal wars clash on, the governments steal and crack the backs of children in mines for money they will never see, Aids spreads, malaria consumes, and girl child soldiers seem beyond repair.

But I find God in Africa–in the midst of the most destitute of places, in the least ones whose lives have been given up on, in tiny acts of grace and raw human need.

He is close to the poor. His world order is very different from our own. Here is where revolution will not come through the wise or powerful, but through the children who stretch their arms to the sky.

And I realized that all I can give is Him through love that never says enough is enough but cracks on through the middle of the most painful places. It’s not that they need Him more than we do, but its because He is at home here, He flourishes here, He is making a way because he is wanted. Here we live close to our desire.

Close to want for more in life and close to disappointment. We befriend the lack of things meeting up to our expectations. We sleep with dreams of possibility in our heads.

It is never as we think it should be. It is harder than we thought it would be. But here we are being born and baptized over again with light and with fire.

The stories. So many of them, the same:

They came.
In the night. Ripped me from my parents
arms. Killed them. Then and there.
Made me walk. Miles. 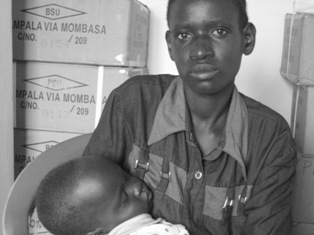 No water, only rain. If lucky.
I begged him to pee in a cup for me.
We ate grass like cows.
They gave me to an old man.
They made me kill my best friend.
They said they would kill me.
My baby is all I have now. My only family.
I left him in the garden once with friends
I came back and they were beating him
calling him the son of Kony.
They called us “killers.”
Sometimes, sometimes I think of going
back to the bush.
At least there, there, I was accepted.
If only I could have
a place of my own.

Sarita Hartz is the founder and director of Zion Project which she began creating upon her return from living in Uganda for five months. She graduated from James Madison University in 2002 and then worked at a rape crisis center in Colorado. She loves being adventurous and building relationships.

Her dream is to raise $300,000 to build the trauma shelter and run the program for the first year, which includes a school, staffing, etc. To find out more about Zion project, including how to donate, you can visit the following sites:

Sarita also recommends you visit the Resolve Uganda website for more info on the current crisis in northern Uganda at: http://www.resolveuganda.org