I had a conversation with a friend from high school a few months back. He was telling me how he was working hard to ascend the corporate ladder in his company. He told me that there’s a lot of money out there, and he wanted his chunk. I think he even used the “piece of pie” analogy, at which point, I asked him, “How big of a piece?” I was curious to see if he had a limit, a point at which his ambition would subside and he could be content.

His response was this: “As big of a piece as I can get.” I frowned, saddened at the road that this young man is on. If he maintains that attitude, he will never get the chunk of cash that he’s waiting for. He will grow up, greedy and unhappy, eventually becoming disillusioned with his pursuit of riches. And sadly, that describes many of us, doesn’t it? We’re still waiting for our “piece,” instead of enjoying the opportunities for abundant life all around us.

My last year in college, I had some friends come up to visit me for the weekend. I was playing the role of John Proctor in a production of Arthur Miller’s The Crucible, my last performance in theater to date. Since they were driving twelve hours both ways, I wanted to be able to take them out for coffee or something just to show my appreciation for their sacrifice. 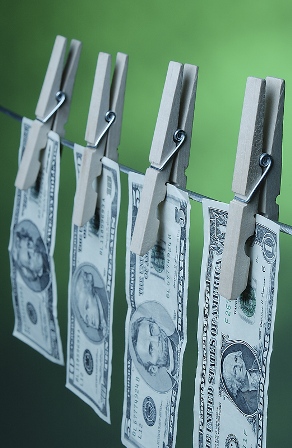 However, being a college student, I was not eager to get rid of extra cash that was weighing me down. In fact, I had exactly $0 to my name. So, I prayed for God to give me just a little money to be hospitable towards my friends. You see, in those days, I was unashamed about asking the Creator for impossible things… even small things like the ability to take my friends out for coffee. Even crazier than that, I believed that God would answer my prayer. The first night that ,my friends came, a campus student organization randomly invited my friends and me out for pizza. Later that evening, as I was getting ready to go on-stage, someone told me I had a note out on the feltboard where theater announcements were posted.

I went out to investigate it and found an envelope marked “Jeff,” and in it was a ten-dollar bill between two index cards. No note. No explanation. Nothing. I had no idea where it came from. For me, it was a miracle. I believed that God gave me the $10.

That evening, I took my friends out for coffee. Another friend of mine excused himself from the table, picked up our bill unbeknownst to us, paid it, and left the restaurant before we even realized what had happened.

As we were leaving, I threw down my “miracle” on the table and remembered the blessing of Abraham: blessed to bless others. The rest of the weekend was full of invitations to potluck dinners and organizational lunches without our really having to ask at all.

Ever since that weekend, I haven’t really worried too much about money. Sure, there have been times when things have been extremely tight, like when I first moved to Nashville. But I just follow the lesson learned from that eye-opening weekend by praying, trusting, and receiving whatever the Father gives.

I’m learning that God really is my “all-sufficient one” – not in some pious, pretentious way, but in a very practical way. I have to admit, it’s pretty incredibly to have Someone meet all of your needs. Moreover, it is liberating me to bless others financially (not, mind you, because I’m loaded with money, all of the sudden). I’m taking the miracles I’ve received and paying them forward, allowing God to use me as a miracle in someone else’s life.

A couple summers ago, my friends and I had the honor of being a miracle to someone – we pooled some resources and covered his monthly rent check. I love using my financial offering to give in this very personal way. It’s extremely rewarding and fun, especially when you do it in secret. I mean, I don’t have any problem with dropping a few dollars in an offering plate, but how often do you get to see whom that directly affects? There is something invigorating about knowing exactly where the monetary blessing is going and towards what.

On a regular basis, I set aside some money for these kinds of things. This doesn’t replace the offerings I give at church, of course, but supplements them. Miraculously, God always finds a way to use the money for something that doesn’t just meet someone’s needs, but also has a way of restoring their hope.

Have you ever been the recipient of such a miracle? It does something tremendous to your faith. Think about itto get reborn into the belief that God is indeed miraculous. For our Father to entrust us with such a task as building up his other children in this respect completely floors me. What grace to be part of a miracle.

Unfortunately, tithing (which literally means giving ten percent of your income) has become a begrudged rite in some churches. My pastor just recently said to not clutch too tightly onto the concept of the tithe (that is, the ten percent part). Rather, trust the Holy Spirit, and give however much he tells you to give. For a certain need, it may be 5%, or it may be 50. This kind of generosity was taken for granted in the Early Church; they simply did not consider anything to be their own. Whenever a need arose, they met that need. Giving wasn’t a religious act; it was a relational one. If someone didn’t have food for their family, then a brother or sister would go sell their kitchen appliances until a fellow child of God could eat.

Of course, a tenth of whatever you have is a good start, and I don’t mean to demean the practice of tithing, but many people stop once they drop the envelope in the plate. They think that their generosity is finished instead of just beginning. Moreover, there is even good Biblical evidence for the giving of ten percent, but the last thing the Church needs is another rule. Let cheerful giving free you from the worries of money. You can actually consider it a form of fasting – a spiritual “cleanse” from the ways of the world. Let go of your blessing to bless others, and, as crazy as it sounds, you will be blessed. When we give God the opportunity to use us as a miracle in someone’s life, our own faith in the miraculous is restored.

Why not give it a try? Be extravagant like the poor woman that Jesus admired. She gave all she had. Take a homeless person out for a steak dinner. Surprise a waitress with a $50 tip for a $5 meal. If someone asks you, give more than they ask. Do something to wake up our riches-numbed society. We need it. You need it.

If you liked this article, check out: Finding Calcutta: My first brush with the poor