The train rocked back and forth. I drifted in and out of sleep, almost in sync with the titillations of the locomotive. How long did it take to get to Lisbon from Madrid, any way? We’d be there by morning, I told myself as I closed my eyes and tried to get some sleep. Other than a trilingual conversation in broken English, Spanish, and Portuguese between myself, a Spaniard woman, and a Portuguese man on his way home to Lisboa, there wasn’t a lot of activity on the Red-Eye cross-country train. 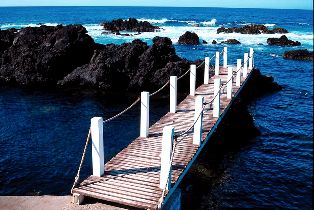 One of my travel companions drank too much wine in a failed effort to lull himself to sleep and ended up urinating on himself – these are the stories that you’d hope to leave out in an epic adventure, but they are also the pieces of the puzzle that make the characters believable… and hilarious. We all laughed together over my friend as he had to invent some way of relieving himself when the bathroom had been locked during the early hours of the morning.

The sun rose on Lisbon, and I, for some reason, felt more alive. Already in a foreign environment on a semester abroad in Spain, I was once again stepping out into discomfort, leaving on a weekend trip to Portugal. There were four of us – Diego, Felipe, Javier, and me. I was Pepe. We had all donned Spanish names for the semester and done such a fine job at it that our peers had forgotten our real names. We had not really made many definite plans for the weekend. We just bought our train tickets, and let the track take us.
.
We roused ourselves to greet the Portuguese sunrise, which seemed brighter and more beautiful than usual. I find that is usually the case when you’re on a journey in which you can lose yourself. Everything is brighter, tastes better, smells stronger, and seems to last an eternity. These sensations have stayed with me for years now. We de-boarded the train, got our bearings, walked right past the ticket booth (ridiculing the idea of instantly buying a return ticket as un-adventurous), and grabbed another train to Sintra. We had heard about this small town about 30 minutes outside of Lisbon, and it had instantly drawn our attention.

We found a hostel to stay in for the equivalent of $8 USD. It was off-season, not very occupied, and perfectly nestled in a less-touristy area on the top of a mountain. One foggy morning, we discovered an old Moorish castle nearby, left from when Spain and Portugal were ruled by the Arabs. We hopped on and off of the stone walls, re-enacting scenes from Braveheart, trying to reclaim some semblance of childhood.

We went to the beach, hiked to the top of the mountain, and gazed out into the blue expanse of the Atlantic Ocean. They used to call this area the “World’s End,” and I could tell why. Blue sky melded into blue ocean with no sign of a cloud or land anywhere in sight; it was difficult to tell where one expanse ended and the other began. When people ask me today (years later) what is the most beautiful place I have ever seen, the Praya Grande in Sintra, Portugal always comes to mind. My best friend and I vowed to spread each other’s ashes from that spot should the other pass away.

We spent our evenings finding cheap restaurants or grocery stores where we could pick up a few items to hold us over until morning. We had a limited budget and cared more about getting where we needed to go than with filling our stomachs. Some crackers, cheese, and a bottle of wine would do us just fine for most of the day. Javier had met some girls on the train from Madrid, and we kept bumping into them. We did our best to tease him, but secretly, we admired him for being so daring. After treating ourselves to one night in a hotel, we ended the long weekend by walking through Lisbon, quickly imbibing the culture around us, before heading back to the train station.

We arrived at the station to find that our impulse to be impulsive and not plan ahead had destroyed our plans of returning home on-time. Worry set in, followed by fear, and then resentment towards each other for not being more responsible. All the trains going back to Madrid were booked, and it looked like we weren’t going to be back in time for class. It wasn’t the end of the world for us, but in our hearts, we felt defeated.

I called the guys together to pray, and we asked God for guidance and to get us home. We hopped on the next local train we could find and just wandered the city for the rest of the day, looking for answers, and occasionally stopping to pray. Finally, we connected with a bus company that would take us all the way back to Seville, where our classes were. It was a round-about way and would take much longer than our two short high-speed train-rides, but it was the only option we had.

Over a dozen hours later, we had been educated on more Portuguese geography, made a few new friends, perspired through most of our clothes, and arrived in Seville literally 30 minutes before class started. We lugged our backpacks and suitcases across the city, running to our language institute building, and got there right before class began. We apologized to our fellow students for any odors they might catch wind of, gave each other a high-five for pulling it off, and thanked God for orchestrating the whole thing. Smugly, we sat back in our chairs and tuned out to what the professor was saying. A deep sense of accomplishment welled up in me, and I knew I was hooked…

Hooked. On a life of risk. Of intrigue. Of not knowing what to expect, but trusting in God to walk me through it. For years, I was petrified to step out, because I had a warped, religious view of God – that he was a disapproving parent who only helped those who “helped themselves.” In the context of adventure, mystery, and risk, I found a God who shattered that view and revealed to me his character of helping those whom he loves – plain and simple.

These days, I dream of the places I’ve been and wonder if I’ll ever make it back to Sintra… or if it even matters. As I reflect on the wonders in the world I’ve seen, I come to realize that it was the adventure of not knowing that was so thrilling, and I seek to find that wherever I can… along with the God who will walk with me when I step out into the next discomfort.