I stared at the full moon glowing, hanging low over Kezar Lake. Clouds above me and the white caps in front of me reflected this eerie light. I listened for the mournful cries of a loon over the creaking of the docks. I thanked God I was alive, what was I thinking? I thought back on those moments…

My heart was maxed out. My ribs were at maximum expansion as I looked out at a crowd of men and boys who had come to this swimming hole with me. I silently prayed to God, and hoped there really was such a thing as guardian angels. My mom had always joked that I kept my angels on their toes, and at this moment, I was pretty sure they needed a raise. 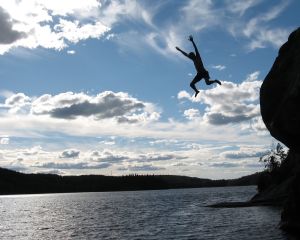 I had been introduced to Emerald Pool when I was twelve years old. I had been a camper at New England Frontier Camp in Maine for most of my life. At twenty-six years old, I had come back to work there as a counselor, and this was my third summer in a row working there. Now, I was the lifeguard on these trips and watched as other men in the making faced their fears and made the leap into the icy basin.

There are two spots to jump from, one eight feet above the water and one twelve feet above. The perfect spot for the city kids who have never jumped into a mountain stream before. The jump itself appears riskier than it is because of the rock formations, and every week I would watch boy after boy stand at the edge shaking, wanting out, looking for someone to let him off the hook, but mommy was not around, and none of us would give him an out. Man up, boy!

Week in and week out I would hold my rubber lifeguard tube and pray for courage for the boys and safety, I didn’t want to be stabilizing a boys neck in that freezing water waiting for help, or even have to clean a boys scraped knee. And I would stare at a spot on the other side of the pool, thought about how crazy a jump from there would be. But where that jump would have a person land, it was just too shallow. I figured there would need to be at least twelve feet of water there, and usually there was less than eight.

I was standing in that spot now. Old enough to know better…still too young to care…and the adrenaline would not let me off the hook. It had rained for a week and the stream was roaring. The pool was at least four feet higher than normal, and I had already jumped from this spot once. I had climbed back up, and was visualizing a swan dive. From where I stood, only the very edge of the pool was visible. The rock I was on was twenty-five feet above the water and set back from the cliff. For my first jump, I had stared at the pool and guessed correctly at the hole I would have to jump through to hit the proper spot. The jump had gone perfectly, I had not touched bottom. I needed more of a rush, I needed a surge of adrenaline. I could only get that by planning a dive.

I did not tell anyone of my plans, I just had to do it. I bent my knees and jumped.

Everything held still. Perfect silence. The silence of total focus. I can still feel this as I type. My stomach tightens and my breathing deepens. I remember the sun as I jumped out of the shadows. I remember the faces looking at me as they realized I was diving. I remember how perfectly spread my arms were, feet together, chest out…scared to death and fearless. Hanging in the air. Suspended, flying with my angels.

Then the world rushed into fast forward, I straightened my arms over my head and planned on punching the surface of the water, but the water was so clear and I could not see the surface.

As I sat alone on the water front, in the moonlight, thanking God I was alive, I wondered if I had finally out jumped my guardian angels. I had survived some stupid stuff and for years I had nothing to live for except a rush that would remind me I was alive. I engaged in every risk taking behavior consistent with the ADHD personality, and at times I just figured at some point I would outrun God’s grace. I don’t know why I was still alive, does God have a purpose for me?

I thought about those angels, how I often joked about putting them through their conditioning drills. Had I out jumped them? No, I don’t believe that, I believe I should be dead, but by the grace of God. I was still years away from a new understanding of God. 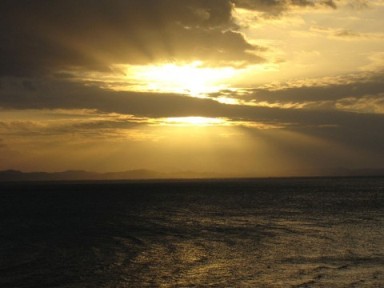 As I hung in the air on that dive, I realized I had over jumped a little, but there was no time to pull out, I would only hope for the best. Mostly I worried about hitting the surface of the water wrong. I had done that once when I flipped off a cliff near Hot Springs, North Carolina, and had the force of a sixty-five foot free fall combined with the over rotation of my spin contribute to feeling gallons of water go up my nose, into my sinuses and into my stomach. That sucked, and I did not want that to happen again.

Then a flash of light. And I was in dream land. I had hit some ledge that jutted out below the surface, too soon, how fast was I going? I fought through those dreams, fought for consciousness under twelve feet of water. I couldn’t feel any pain, but knew that was the stupidest thing I had ever done, and I needed to get to the surface, but I had forgotten how to swim! I would not tell anyone about hitting the bottom, I would just pretend I was ok and ask how the dive looked and tell people that it was stupid and no one should do that.

I managed to find the rocks to climb out, and I stayed under water for a few more seconds to get my thoughts together. Then I tried my feet and I could not find my balance. I could not stand. I looked around at the crowd and the looks on their faces told me more than I wanted.

There has been many times in my life that I have been hit in the head hard enough to make one eye black out, so this was not new to me, I could not see out of one eye, I was sure they did not know that, though. My sight would come back once my nervous system rebooted, I was sure.

As I tried to find my footing, I could see, through the cloudy red sunlight and shadows, help coming. I would not know until I was seated and the waves of nausea came on, that the skin above my eye was blocking my vision, and that I had blood pouring from the hole in my eyebrow and a split over my nose. I kept trying to wipe the water out of my eyes, and it hadn’t occurred to me that it was blood. I had no health insurance, so I asked one of the paramedics to sew me up. He said no way, we were on our way to the hospital, and, could I walk? He taped the skin out of my eye, and I managed to hike out to the car, we went to the hospital for some stitches.

I look back at the night I sat on the log bench on the water front pondering life, asking why I was still alive. I think now, it is a miracle that I still have use of my legs, I don’t have brain damage (though that might be debatable). Maybe I owe this to all those years of hitting drills in football, neck rolls in wrestling, learning to live with concussions, strengthening my vertebrae…

For most of us, our guardian angels sit around waiting to be necessary in our lives. Most of the time, our angels are almost unnecessary; their work looks like union work. We are boring these powerful beings to death. They were designed for this challenge. So, I end this thought with a commitment to my guardian angels, to make them earn their keep, so they can have a story to tell the rest of their gang, and with a challenge to myself and guys like me: man up! Take the leap of faith. God designed us for a purpose. Find out why you are still alive!

Scott Molgard , of Wilmington, MA, has left his career as a personal trainer to travel the world with his wife, Linnea.