As I boarded the plane, eager to complete my entirely-too-long journey back to the States, I stared down at my ticket with a confused gaze. 3A was written in bold black ink. But how could I have landed a seat in First Class? 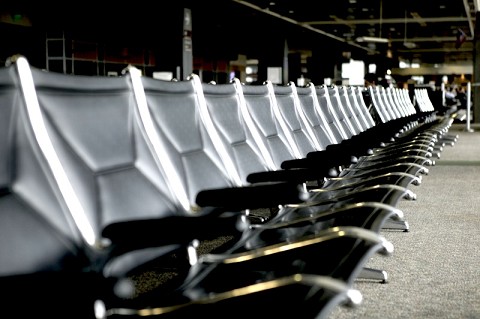 I hesitated, imagining the embarrassment if I sat in the seat, only to realize later it was not my own. Curious thoughts ran through my head: Perhaps the ink was running out and a 1 before the 3 had not been written. Or maybe the arduous 12-hour wait in the unforgiving airport chair had taken its toll on my tired brain, causing me to inaccurately read my ticket. I certainly had not the money or the status to merit such a prestigious position.

The empty seat beckoned me, enticing my tired legs to join its spacious quarter. Feeling the impatience of the crowd behind me, I carefully slid into the roomy window seat. I glanced around at the nearby passengers, all adorned with influential suits and rigid ties. Just behind me hung the curtain. The curtain. The one that keeps First Class secrets within its folds. I had never been on this side of the curtain before.

As I sat in the seat, enjoying the additional amenities and still debating how I could have acquired such an honor, a single phrase suddenly pressed powerfully through my thoughts: “There are no second-class citizens in Heaven.” This phrase, spoken by an Israeli Arab pastor, was a central theme throughout this year’s meeting of Israeli Arabs and Messianic Jews held under the lofty trees of Lavi Forest.

Over and over again, he and other pastors drove this point home to a crowd of listeners eager to hear its life-giving message. For many years now, these groups of people have made a decision to come together under the name of Jesus Christ, laying down their dark histories and jaded pasts, and instead choosing to extend the love so generously given to them through Christ.

As I watched these groups interact with one another, hands extended and smiles sincere, I could find no other word to describe the event than captivating. Their love for God and for their brothers and sisters in Christ was simply captivating. These acts of love were obvious. Arabs bellowing worship songs in Hebrew. Messianic Jews dancing joyously to the songs in Arabic. Handshakes and hugs of love, acceptance, and forgiveness. And the ultimate symbol of brotherhood: a meal shared together by all.

Indeed, there are no second-class citizens in Heaven. Christ died for one and all, and each has just as much responsibility to share and receive this love as the other. On this beautiful Saturday afternoon, these groups of people made the choice to do just that.

With the recent happenings in Gaza – an true eye-opener to many Americans – the reminder of the meeting in Lavi Forest comes like a breath of fresh air. It is a simple reminder that God is still in control. That, while such healing takes years upon years, it is real and it is happening now. It exists in a team of Israeli pastors of assorted descent, working day after day to serve one another. It exists in the individual lives of the believers in Israel and Palestine, surrendering their own heritage for one far greater. And it exists in us, through our prayers and expressed love for all people.

I leaned back in my seat and reminisced on the love of Christ and that wonderful meeting in Lavi Forest. I thanked God for the opportunity to see such a remarkable occasion take place, for my stay with the Israeli Arab family, learning about their struggles and brave efforts of restoration.

As the plane took off into the night sky, I smiled at the thought of each of our undeserved places in the Kingdom, and how God had blessed me with an unmerited First Class seat just to demonstrate the depth of such a phrase: Truly, there are no second-class citizens in Heaven.

Becca currently dwells in Colorado Springs. Her days are spent working at a Middle Eastern cafe, where she is learning Arabic. She loves being in the mountains, reading and writing – especially, reading and writing while in the mountains. God has given her the vision for a worldwide network that will contact believers across the globe, and she’s in the process of seeing that vision become a reality. She digs community, coffee, and traveling, and has found a recent love for swing dancing.