Pennies, face up, are good luck. Slight good luck in our economy, but luck itself is a precious commodity akin to hope.

Hope, whether valued at a cent or constructed as a rainbow, is one of only three things that actually remain.

There was one such heads-up, hopeful penny on the corner of Chicago and Ashland where we met Robert. Within an acquaintance of two hours, our time with Robert would challenge some of our limited conceptions about urban homelessness. 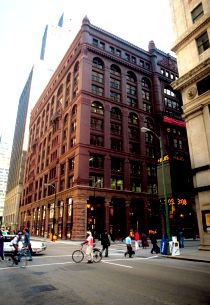 Robert and I spotted the penny at the same time, but it was Robert, himself asking for pennies, who forbade me from picking this one up.
Its heads up. Good luck. Leave that for somebody else.

We did, and Robert, Nikki, Casey, Elizabeth, and I walked the two blocks from Roberts corner to the local coffee shop with WiFi access. We shared drinks, and he shared his sandwich with Casey and Nikki.

Mostly, though, we listened.

Listened to Robert, three months new to Chicago, speak on such varied subjects as the twelve tribes of Israel and the perils of excessive gold teeth. Not at all the type of conversation our preconceived notions had envisioned.

In special education since 4th grade, Roberts ability to be just as conversant as us was humbling. Often, there is arrogance among formally educated people where condescension colors even sincere kindness.

Robert panhandles because he is schizophrenic and hears voices and must deal with people on his own terms themselves highly dictated by medication. Even accompanying four non-menacing white girls to a coffee shop on a sunny Sunday afternoon was unnerving for him. Paranoia and anxiety mark the mentally ill and to ask someone to trust us and youll get dinner suddenly seems very unfair.

The alcohol on his breath is no more than what I have smelled on my friends, my own, yet never critiqued those choices.

We figured Roberts childhood contributed to his situation on the streets, but six years old and raped? A mom who bore him at 14? Best friends gunned down just hours after you saw them? Poor decisions borne of poor conditions.

Robert never made excuses, but retained a dignity that says one shouldnt have to.

Mozart was one of our final topics and he exited unassumingly with his bags.

He wants a job, but needs an ID.

I have a strong desire to dissect here, and the questions are worthy of discussion…

Why should a stranger trust you enough to go anywhere with you? Where do people with mental or physical impairments go if they have no family? What else can you do if the streets are literally all you have ever known? Where are the second and third and tenth chances? Why are people in shelters when so many Christians have spare rooms?

Issues have faces, and statistics drink Iced Raspberry Mochas and sometimes you just feel as if Jesus would have handled things differently. So you remain silent.

There is a penny, face up, on the corner of Chicago and Ashland. Robert left it there, and maybe, just maybe, hope remains.
If you liked this article, check out: Afterthoughts on the Altar

Holly is a servant, seer, and story-teller. A pilgrim at heart, she travels all over, but Newnan, Georgia is her home. An English teacher in public schools for 13 years, her heart leans toward teaching, pointing lives toward a vision of what could be.