From our friends at Advent Conspiracy:

Sounds like something on a monochromatic line graph. The kind in the corner of the economics textbook page that makes your eyes gloss overnot inspire you to join a conspiracy.

Is this whole thing really a scholarly and complicated balance of numbers? Maybe its an idealistic government program. Or a noble take from the rich, give to the poor fairy tale. Is the whole point just to put a few more dollars in the offering plate once a year, or is there more? What does redistribution look like in the lives of real people?

Enter Anna Studenny, age 25, who has been a part of the Imago Dei Community for two years. When Anna heard about Imagos vision for Advent, she first thought it was brilliant. I had been feeling that Christmas was getting ridiculous for awhile, she says, and I didnt care to get more crap. 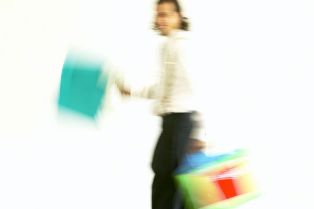 Last December, Anna was volunteering regularly at the church office when Imago took its first Advent offering and invited the congregation to go shopping for families at Binnsmead Middle School in Southeast Portland. Social workers from the school partnered with Imago to get needs lists for 79 low-income families, many of them refugees. Most families requested basic things like food, household necessities, toys and gardening tools. Anna signed up, along with 40 other families and individuals.

It was just exciting, she says. Everyone was so creative and thoughtful, even spending their own money with the attitude of lets get them the best. It was exciting to see families helping others togetherand they just couldnt get enough of it. Anna remembers seeing families shop one list, come out to the parking lot to drop off the presents, get another list and go back for more. I could sense this energy that it wasnt about us, she says. Anna was so energized that the second night she went back to help again.

Just a few weeks later, Anna was hired on to do the bookkeeping for this shopping trip, as well as the other local Advent initiatives. About $27,000 from the Advent offering was allocated to Portland-based projects: $14,000 went to Binnsmead, $10,000 was split between ten existing Imago ministries and $3,000 was given to individuals and families in the community.

This was the first time we as a church had done something like this, says Anna, so I was operating on the fly. I discovered we could have avoided some pitfalls if we had more time to plan. I spent at least two months sorting all the receipts and expenses.

After working with the project from the inside and transitioning from volunteer to coordinator of all local distribution for the Advent Conspiracy, Anna learned that the goal of this partnership wasnt just about a shopping trip.

Were not just giving out handouts, she says. We desire this to be relational giving. Were not all about writing the checkmaybe some churches will be, but we hope not. That doesnt go very far. Imagos vision goes deeper than giving some presents to sending volunteers and tutors to serve the students and their families throughout the year. Anna acknowledges it will take a few years to build those relationships. It would be easy to dismiss Advent Conspiracy as a two-month program or a special Christmas project, but the goal is to live in a way that meets peoples needs all year long.

While Binnsmead was a big part of Annas job at the church office, it turned out to be only the beginning. As Assistant to the Pastor of Community Relations, Clark Blakeman, Anna served as liaison between those who gave money in the offering and those who received it. Anna describes this part of her role as finding out peoples needs and how to resource them. Members of the congregation alerted church staff of individuals and families in the community who were in tough situations and had practical needs.

Were not a bank, but there are legitimate needs, Anna says. One man had a stroke and couldnt afford to install a safety bar in his shower. Another man, a father of two young kids, whose family had been homeless off and on for years, finally found a job but wouldnt get a paycheck for another month. Advent offerings helped him with rent and a car payment, which he needed to keep his job.

As Anna made deliveries, she says she was, blown away by the generosity of the congregation. On one trip, Anna visited a woman who was living in a basement so crowded that there was hardly room to walk between boxes stacked up the walls. She invited Anna inside, threw a blanket over a pile of toys in apology for the cramped quarters and sent her son to the other room so she could confide in Anna. She was so grateful, she says, and told me if it wasnt for Imagos help, she wouldnt have been able to give her son anything on Christmas Day.

Some people just need a break, Anna says. This is a way to give sincere help. Money isnt all bad. Its more than just the checkits a glimmer of hope, allowing people to experience Christ in a tangible way. That can be used for powerful things.

Giving away money is great, but what happens if you dont have any money to give? This is something Anna understands. Growing up in a big family, shes never had much extra. When she started getting involved in Advent Conspiracy, saving money on gifts and giving it away wasnt an option. I didnt have money Id be spending anyway, she says. Instead, she gave her time, gifts and passion. You dont have to be wealthy to give to others, she says. The whole point isnt that the rich are giving to the poor, but rather how we use our assets to serve other people.

Anna gets straight to the point and firmly challenges, This isnt something you just do at Christmas. Its a way of life. And while money is a big part of it, money isnt everything. We are also called to redistribute our gifts, talents and skills to serve other peoplenot just our family or friendsallowing what God gave us to be multiplied.

When asked about how this whole Advent thing has impacted her, Anna says, It was so much fun to participate in something truly groundbreaking. Her face brightens as she describes the best part of her job: Giving money away, meeting people and hearing their stories.

It turns out redistributing wealth isnt so much a textbook, a program, a fairy tale or even solely about money, but rather a beautiful picture of how people live and how they love.

Its time to conspire.

Advent Conspiracy is an initiative among Christian churches and ministries aimed at bringing meaning back to the holidays: “Christmas was meant to change the world. It still can. Worship more. Spend less. Give more. Love all.”
Visit www.adventconspiracy.org for more info.