Being long-legged and then cramped in a bus for 14 hours is anything but fun. I know that we have to make sacrifices for the Kingdom and all, but after a year of sacrificing ample leg room I can only get more frustrated when these opportunities present themselves. Thing is, I had found an awesome seat in the front of the bus where I could stretch my legs out. Unfortunately, the bus driver’s helper didn’t want me sitting there because apparently I looked too comfortable or something. He made me sit next to Sarah. 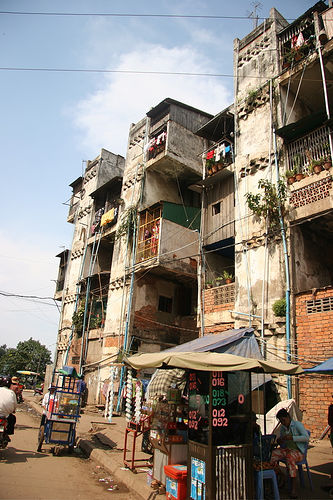 Traveling on buses in foreign countries means you stop a lot. In fact, sometimes I think that they just get bored from driving so they pull over and tell everyone that they can have a 20 minute bathroom break in the bushes while you watch them stand outside the bus and smoke a cigarette. After awhile you begin to look through their schemes. Of course we didn’t have to go to the restroom because we had done so no more than an hour before. On 14 hour bus rides I, personally, would like to see how fast we can get to our destination. I like to think that we want to break the “14 hour record,” especially when I have no leg room… but that’s just my selfishness speaking.

We got to the point in the trip to Phnom Penh that the driver decided it was time for us to eat lunch. We had, mind you, stopped no more than an hour before that. I wasn’t smart like some of the other people on the bus and I didn’t pack a lunch. This left me with very few options. I stepped off the bus and into a puddle of mud. I realized that my choices consisted of Pringles and soda from various street vendors. With only 20 minutes I saw that going into the restaurant nearby was probably not an option. They like to take their time making food in foreign countries… and it’s not that they’re trying to do it in a sanitary fashion. The FDA would scream at these guys.

So I’m standing there munching on my Loaded Baked Potato Pringles, soda in hand, with about 15 minutes to spare. The rest of the crew was milling about trying to decide what they wanted for lunch from the other 25 flavors of Pringles. Yes, even in other countries it’s easy to be overwhelmed with options. I’m standing there minding my business and taking in the scenery of a muddy road, frazzled vendors, and kids everywhere. One thing you can always count on in foreign countries is kids. I think the majority of the world’s population consists of children. Unfortunately these children were beggars.

I say unfortunately because I have such a heart for beggars, homeless, and the like. When these people approach me with open hands in an attempt to get something from me I cave. This hasn’t always been the case, especially up to that point in the year. I had turned countless beggars away out of a calloused heart and false assumptions, but God always has a way of redeeming what we long to give. A little girl, probably no older than ten, approached me with a half-hearted smile and open hands asking for some of my Pringles. With a smirk I grabbed a few Pringles out of my stash and handed her the can. I hadn’t eaten very many and didn’t think that they were good anyway. She smiled brightly and walked away… and as a result, I felt pretty good about myself. I started to walk away when another girl ran up to me and pointed to the Coke can in my hands then to her mouth. Clearly she wanted some soda and knew that I was the sucker who just gave away my Pringles. I popped the top, took a swig, and then handed her the can. Again, this five year old walked away with a radiant smile.

I don’t usually care that I give things up for people like that. It doesn’t take much out of me other than a heart and a little bit of willpower. I found my way back over to the bus and I decided to watch them and take in what they were going to do with the chips and soda. I watched the girl with the Pringles can pull out a few chips and then hand the can over to another beggar, this time a man. He took a few chips out, walked the can over to another guy who took a few and did the same thing until they were all gone. And the soda? Yeah the little girl took a sip, walked it to another person and gave it up; they, in turn, gave it to another person and so on until it was gone.

They shared their blessing.

It’s easy to see the lesson here: share your blessings. But I find it more interesting that it’s harder for a community of people who live in an affluent society (us) to give things up and share than it is for a community of beggars. They have next to nothing and they’re willing to give up a stash of chips or a can of soda in order to see their “family” survive, or at least to have something to fill their stomach.
Our Church in America needs to learn to share its blessings.

This starts with you and this starts with me. We have a plethora of resources at our fingertips and we have to ask ourselves if we’re willing to share it. If we are, how are we going to do it? And once we have all of that figured out, we need to do it. The last step is usually the hardest. What’s it going to take for you to invite others into the blessing and then actually let them receive it?

And so I stood there and took all of this in until the bus driver called for us to get back in our seats. I let everyone file on as I took in a last look at this small community of saints my own family, really. Here was the body of Christ at work, operating as it should be. It’s amazing the things out there that tend to captivate us, no matter how large or small. Eventually, I found myself walking back down the aisle of the bus thinking of these saints as I folded myself into my seat for another six hours of travel. Isn’t God good?

Matt is an ordinary radical who just finished an 11-month, 11-country pilgrimage around the globe with the World Race. In early January he’s moving to Port Huron, MI to work on staff with the same organization. Matt loves to see the Kingdom of God manifest itself in the most unlikely places through his own life. He loves Jesus and hopes that you do too.