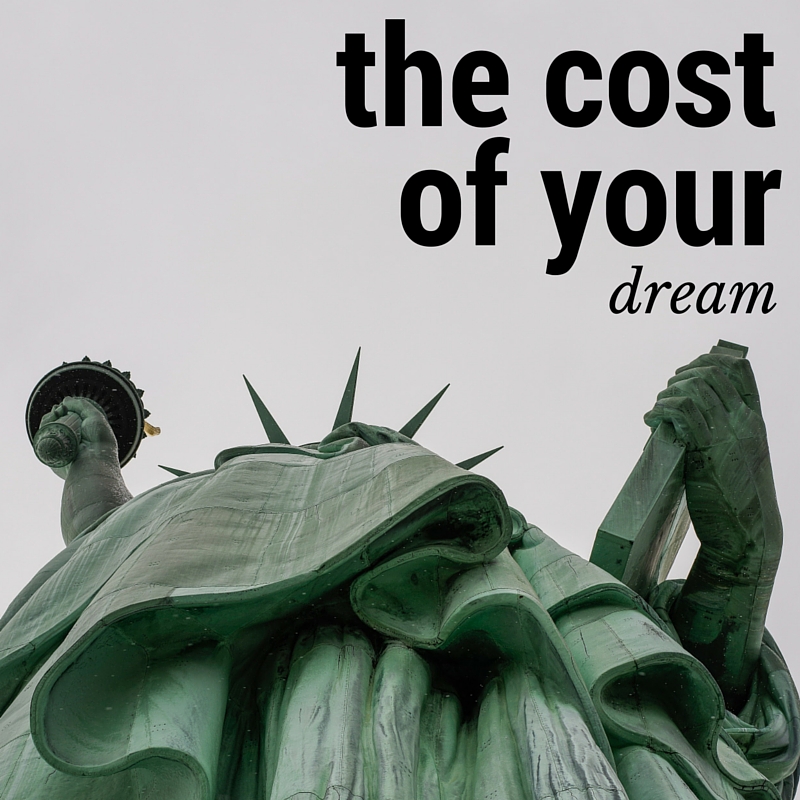 I used to be obsessed with dreams.

But not so much the ones at night when you’re asleep. I’m talking about the ones you think about often during your slow work day, the ones that you want to pursue in your garage, your hometown, your journal.

I used to live in dreams. I talked about my dreams all the time, so much so that I identified more with them (despite them still being in my head) than I did with the present.

Sometimes describing your dreams and aspirations is looked upon with more grace than when you’re working the daily grind to actually make it there.

Dreams aren’t bad. But dreams are abstract. Not until you put a little time and effort into ‘em do they become something: reality. No longer just a part of you, but an invitation to all, and an actual description on your resume.

My first time to New York City was last summer. It was hot and humid and we walked far too many blocks. I assumed all put-together tall females were models, and perhaps they were. Probably not. But everyone roaming, touring, and sprinting the massive city were all there for some sort of purpose, and it was both thrilling and terrifying to figure it out.

I loved making up stories to go along with the exteriors I saw: the dark windows hiding important people in cushy limousines, the Pinterest couple with their puppy at Central Park, the Asian vendors in Chinatown.

My dream is to go back at Christmastime. Everything is magical then, especially the larger than life Macy’s and store fronts exploding with green, red, and white. Or so I’ve been told.

But dreaming about it won’t get me there. A ticket or roadtrip will. Sitting down and making those plans will.

I find it oddly fascinating and sad the way we’ve created ourselves to be full of dreams and aspirations but take little action. Maybe our faith is even smaller. Maybe we just cross our fingers and hope someone will stumble upon our unspoken dreams.

Maybe we just create Pinterest boards of bucket lists and future home décor and the perfect wedding day, but the likelihood of ever checking off the list or creating a minimalist home of recyclables is slim. Too slim. Next to never.

I am a strong advocate for belief. I believe, so I do. See? Belief leads to action. I had a dream to travel, I believed I could do it, and now I have thirteen new stamps in my passport from this last year. Two years ago I had a dream to write a book, and now I’m doing it. Granted it’s hard, and I do more crying than dreaming now, but I’m doing it.

So. What are your dreams? But more importantly, what are your plans, your steps, your actions? What will you do to get there?

Make a bucket list, yes, but cross it off. Actually go skydiving. Make the call, drive to the place, put on the harness. Of course the “before” part isn’t Instagram worthy, but that’s what got you to the filtered square version anyway, isn’t it?

So. What are your dreams?

But more importantly, what are you willing to do to make them a reality?