I could hear the drums. At first I thought my mind and body had decided to team up and play a trick on me to pay me back for all the hell I had put them through that day. The climb had been an exhausting experience, to say the least, and not only the climb, but also the entire trip itself. We had endured a hot, cramped, six-hour journey across Ghana the previous day, and an even hotter, strenuous six-hour hike up its highest mountain earlier that morning. 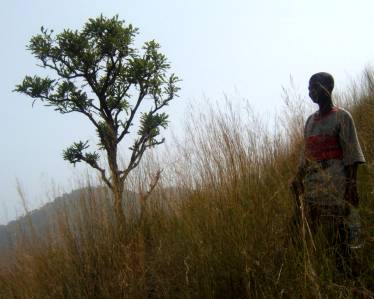 The sun had just barely set in this tiny, West African village, but I could feel the darkness kidnap my eyes as I strained to locate the source of the sound. After finally convincing my companions that simply sitting and wondering was not an option, we took up on tired feet and set out on the same dusty road we had walked just hours before – only this time, we walked as different people.

Our aching legs shouted not-so-subtle reminders to us of just how much we had put them through already that day. Our climb had begun earlier that morning when the sun was still too shy to show itself above the mountains broad shoulders that towered above our heads. Even when it finally did made its appearance, however, the thick mist that clung to the morning air veiled its brilliance – and its heat. For the latter, we were grateful; for the former, slightly disappointed, that is, until we learned to appreciate the magical and mysterious quality the fog gave to the jungle.

As we hiked, we gained more and more certainty that our guide, Charles, was trusted to lead us for two reasons. For one thing, the battered flip-flops that barely covered his feet stood in stark contrast to the mosaic of hiking boots and tennis shoes we had decorating ours, and spoke of experience. Also, the machete he wielded forced us to trust him with our lives, whether we really wanted to or not. It chomped through the thick foliage with an insatiable appetite for destruction – simultaneously creating and scattering bright green confetti along the drab and dusty path our parade marched – bringing the appearance of life wherever it landed. For four hours, we tasted nothing but the water we willingly poured into our mouths and the sweat that found its way there on its own. With every step, exhaustion threatened to set in, but the ever-growing sound of the waterfall beckoned us toward our goal with a promise of rejuvenation unlike any other. When we reached the falls, the sheer majesty and power of the pure, white cascade commanded our awe. It was literally larger than life and imagination; beyond any attempt of an accurate description.

The powerful intimacy of that moment could not be fully expressed, only intuitively understood in the way it made me finally realize all that really mattered and all that never did. I felt so small, yet anything but insignificant. I cried, though not entirely certain of why. I felt a deep sense of longing to be one with this creation, but an even deeper sense of longing to be one with the One who created it and me.

The deafening nearness of the drums called my thoughts back down from the mountain to the village road again. We had just been informed of the source of the music – a church. As we grew closer and closer, my heart began to swell. I slowly breathed in the cool, night air in an attempt to still my racing heart, but it was no use. The desire I had felt on the mountain had regrouped, re-strategized, and returned with a vengeance. I desired to be one with the music, the drums, the people, the mountain, the water, the joy. I desired to be one with the Author, Creator, and Perfecter of it all.

My steps fell into line with my heartbeat as we drew closer and closer to the church. I could hear the rocks and twigs crunching beneath my feet – tempting me to go faster. All at once, I was running. The Creator – my Creator – He was there, in that church. I just knew it. I was drawn to it – to Him – and it would have been impossible to keep me away.

I raced into the church, leaving my companions behind, and immediately accompanied the villagers in their dance of joy and praise that my heart had already been engaged in with them my entire journey down the road. The vibrant colours and lights that existed there in the midst of the dark African night swirled in my head as I spun and laughed and joined in their song. They welcomed me with a deafening applause, identical to the one the waterfall had ushered me into its presence with earlier that day, and it was then that I realized that this is what my heart had been missing. Time does not always heal, and peace does not always last. Home is not always where you are, but where youve been – no matter how short the stay. Your heart has been left behind, because it was captured by the paralyzing reality of grace, peace, beauty, and love. For me, home is where I met God most intimately – in His silence and stillness of peace – basking in the overwhelming complexity of His creation that was made for His glory and my joy. And that joy is what caused me to forget whether or not there was any other time in my life when I heard my Beloveds voice any louder or felt more alive.

For me, home is where I can hear the drums.

Jamie has a nomadic heart that currently finds itself in Saint Louis, Missouri. She is passionate about creativity in any form and loves to write, sew, paint, take pictures, have conversations, dream, and love.More than anything, she desires to seek the Kingdom and bring the Kingdom into the places where it is the hardest to imagine.