Ms. Brown is peering at us from behind the screen that surrounds her porch as we pull into the yard, clutching the youngest against her chest as she watches the five of us approach. Her eyes are wide, except the outside corners, which are scrunched together to make room for her smile.

There are five of us this time-Jason, Haley, Jessica, Brent and I-to represent our Bible study group who volunteered to adopt a needy family, and this is our second time coming to her house. She has four kids at the time, none of which are hers, but all of whom she loves as much as her own.

Ms. Brown is a large woman, and she really doesnt even have to hold the baby as he rests against her breast. As a foster parent, she volunteers to keep these kids, after having raised one of her own. Charles is now thirty-two and in the military. He returned home from Afghanistan two weeks before Christmas, only a few days before our first visit with the kids. Now stationed only a few hours away, he is able to visit every weekend. He brings gifts for the children and has accepted the role of father figure. 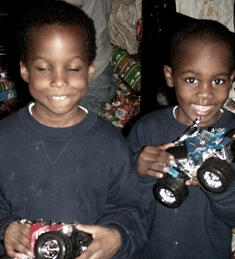 We walk into the house and stand in the living room talking and greeting, the familiar and joyful sound of children laughing and playing in the background. Josh is the first to see us through the red curtain that separates the living room from the den. He runs up the stairs and latches onto the first leg he can find, which happens to be mine. I see every one of his baby-teeth when he looks up at me, the white from his smile contrasting the dark complexion of his skin. He is glowing and thrilled to see us, as if he has just witnessed Santa landing his sleigh on a nearby roof.

We walk down the three steps into the den where we are greeted with hugs and smiles from the other two children. I am the first one to reach the den and the first to receive the hugs. Jessica hands them their presents, colorful paper bags full of candy and small toys. The red bags go to Joshua and Derrick, the pink one to Jada. Baby Josh also receives a small stuffed dog with a heart hanging from its collar. The children are enthralled with their gifts and begin to tear into the candy immediately. Only one piece for tonight, Ms. Brown shouts through her laugh.

These children are all so full of contrast. Each has a different story and each will most likely have a different future. Derrick is the oldest. He is five, quiet and shy. As soon as I see him I remember pictures taken of him the first time we met. In the early pictures he looks distant, trying to keep everyone at arms length. In the picture I took of him and Josh moments after opening their first presents, he is biting his lip, eyes half closed as he fights back a smile. In this picture he holds a toy four-wheeler with chrome handlebars and rims, red paint covering the rest. His foster-brother, Joshua, stands beside him, holding the same toy in blue, beaming with joy. Nineteen teeth can be seen showing through his smile. They are wearing matching navy blue jumpsuits in the photograph, and the shoes they opened just minutes before. The pictures taken of Derrick later that night show him playing with the toys, all of his guard down as he smiles and laughs and giggles and screams.

Joshua is the second oldest in Ms. Browns care. He tells us that he just celebrated his fifth birthday the previous week. He hands me the box of chocolates from his red goody-bag for me to open. I tear the Saran Wrap from the box and open the top for him. He gazes in at the assortment and finds the one he likes. He takes a bite and lets out an MMMM, as red goo seeps out of the chocolate left in his hand. Strawberry! he exclaims with excitement.

Joshua is the lively one in the group. He sings almost the entire time we are there. He sings Christmas songs, or at least the tunes of Christmas songs, since he doesnt yet know the words to most of them. They come out sounding more like a drunken chipmunk reading poetry than any song I have ever heard, but he sings on. Ms. Brown tells us that he once had a note sent home from school because his singing had disrupted class. She put him in timeout for it, but the whole time he was standing in the corner he sang old spirituals from the times of slavery, We Shall Overcome and Oh, Freedom. She laughs aloud as her mind wanders back to that day, and I can see the wrinkles around her eyes deepen as the corners of her mouth climb high on her cheeks.

Amidst the ruckus, Derrick sits in the floor staring intently at a maze that came in his package, blocking out all of the singing and story-telling, focusing only on the game until he finishes. He figures out the maze faster than I can and hands the finished product to Jessica for inspection. She smiles and displays his work for everyone to see. We all clap and cheer for him and his top row of teeth shows as he fights back another smile. This time he is unable to keep it from shining through, as he is proud of his accomplishment.

Derrick is smarter than most kids, and he has been through more than most will ever have to endure. Ms. Brown tells us that the verdict has just been released and his mother will never get to see him again. Ms. Brown has had him since he was two years old, and he has had periodical visitations with his mother for the past three years, but the judge has decided that Derrick would be better off without any contact.

It is for the best, though, since his mother cant shake her drug habits. The LSD and cocaine are too tough a match for her willpower.

I know that Derrick will be an important figure someday. Maybe he will overcome his shyness and become a great leader of some breakthrough company, or maybe a political leader. Even if he keeps his shy ways, I imagine him using his intellect to write masterful stories, and books on philosophy and religion. If there is one thing I am sure of, it is that he will overcome this circumstance.

Keith is a college drop-out at Valdosta State University. He is going back to school in the fall to start working on his philosophy degree while frantically trying to finish his book about Bible Belt Christianity. He also has a pet Dumbo Rat named Ebu who is over 15 inches long from head to tail. You can look him up on Facebook or read his blog at kmizzle7.livejournal.com.