I spent Saturday morning serving the homeless population in Los Angeles. A group of about 20 adults and teenagers from Normandie went to skid row in L.A. While there we passed out bag lunches, clothing, shoes and Bibles. We talked anyone who would have a conversation with us and concluded with a prayer for those we ministered to. It was a wonderful few hours and I met some amazing people while I was there.

I went with my roommate and while we were there we saw his childhood Sunday school teacher. Thats right, Chris Sunday school teacher was living on the streets of L.A. Needless to say, Chris was not expecting to see him there! We had a good conversation with him and then he moved on with his lunch. 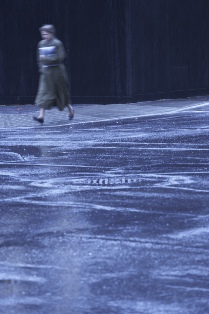 I also met a woman named Emannuella, or Jenny. She immigrated from Mexico several years ago and was now on the streets. We were able to give her lunch, a new Bible and new shiny shoes! She was so excited for her new pair of shoes. I was able to speak with her for a little while and I think that she is working in one of the sweat shops that are in the area.

I do not know this for sure, but our conversation sounded very much like it when I read between the lines. Her daughter lives in Huntington Beach with her husband, but she is tooashamed to go visit them. She speaks English and is working at what she believes is the best job she can get.

I also met Eva. She is from Tanzania. She is a missionary. Thats right, a missionary. She came to the U.S. from East Africa as a missionary to us and is now living in the street. She was a wonderful woman and it was an honor to meet her and pray for her.

I met another lady who blessed us with an impromptu gospel concert. She sang a few beautiful songs and then left us to go eat her lunch. She received a huge round of applause and another homeless man walking by said, There are lots of people with talent around here, you just dont care.

Now, this is not the usual picture we have of the homeless. These are our Sunday school teachers, our mothers, our missionaries and our future American Idol contestants! Yes, I talked topeople with mental illness, addicted to drugs, etc. but we forget that every person on the street has a story, and their story is not that different from ours. They just had a couple of things go bad for them that went good for us.

So, the next time you come across someone who is homeless dont jump to conclusions. If you dont take the time to hear their story and learn from them, dont judge where they have ended up. Our call as Christians is simply to love and serve them because they are to be as Jesus to us (Matthew 25).

Jimmy is a disciple of Jesus of Nazareth, the husband of Desiree, a seminary student, and a servant of the homeless in Pomona and a church in Los Angeles.