A few weeks ago, Wrecked was visited by Larry Brayan, founder of Divine Touch Ministries, and had the privilege of hearing his story and poking his brain a little. The following is a highlight of that interview:

All copyright laws are in effect and any duplication of this without permission (Larry starts laughing in a fit, and so the interview begins…)

Where are you now and how did you get there?
We are in the middle of a transition. We did 2 years of missions work in South Africa, Swaziland and Mozambique.

At this point, we just felt that God wanted us to come back to the U.S. How we got there is quite an interesting deal. In May 2004, the Lord spoke to my wife during her quiet time that he wanted to send us to Africa.

That was quite a shock. I was focused on working with Fed Ex, buying a house, and doing the American dream thing you know, getting our girls to college and getting them set up for that. And then we get this bombshell dropped on us. That just sent us into prayer, finding out, OK, God what do you want?

I had a very explosive experience with God on the Fed Ex truck one morning. I was being very rebellious, because I wanted my stuff. I wanted him to work on my terms. While traveling to deliver the packages, I was praying and worshiping God, and his presence came into the truck. It was the first time I ever experienced that intensity. The only way I can explain it is that it was like someone took a huge balloon and began to blow it up in this truck. And it began to fill every cubic inch of this vehicle. It was just like an overwhelming weightiness. I pulled over to the side of the road and just started weeping, because I felt convicted by my whole attitude of my heart. And I began to repent I said, I want what you want for me.

Immediately, what was impressed upon my heart was there were three things that I needed to do: I needed to resign from my position at Fed Ex, I needed to close out our house, and I needed to sell everything that couldnt fit into suitcases

The flight over [to Africa] was tremendous. We got to South Africa and had no idea where we were going, except that we had an address We rented a truck and started driving to the Mozambique border. I have never been across an international border like that in my life. By the time we crossed into Mozambique, it was pitch dark. When we got to the capital of Mozambique Maputo we couldnt find our way around. We pulled into the gas station and asked somebody, [and they] said, Yeah, I know where that place is, but I cant take you there till 11:00 when I get off of work. That was in 45 minutes 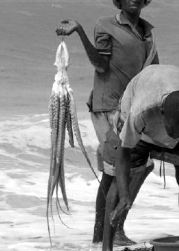 When I came out [of the store], eight drunk teenagers were surrounding the vehicle, talking to my daughter. I said, Hey, what are you guys doing?! As they turned around, my wife said, Thats her father; you go talk to him. I just started sharing with them. They started asking me questions, and then they said, We dont like Mozambique. We want to go to America we dont know our father or our mother, and we cant get any jobs here.

Just then, I just had this inspiration; I said, You know what? You may not know your father, but he knows you. They said, Really?
I said, Yeah, and I know who he is.
You know who our father is? Is it you?
I said, No, Im not your father. Your fathers in heaven. Hes God. God is your father. And if you want, I can introduce you to your Father through his son Jesus.
And they said, Yeah

So through their broken English, I led them through the prayer of salvation and blessed them. They were sober by the time we finished. They were crying, and I was crying, because I was like, God what are you doing?! This was just great confirmation of Gods favor on our lives in this nation. So, that was the conclusion to my first day in Africa. 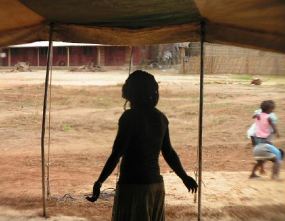 What is the good, bad, and ugly of ministry?
I think the good is always is in relationship and pointing people back to the Father. South Africa, just like the rest of Africa, is besieged by orphans, fatherless people. Not just little children, but also grown adults.

They dont have a clue as to how much the Father in heaven loves them, because they just spent so much time looking at him through the lens of their natural father. Whether he abandoned, abused them, or mistreated them, thats how they see God. The good is always being able to introduce people to the love of God – thats always the good – and building that relationship.

I think that too many times in Christendom we just want to get the numbers, and we forget about relationships. And thats the bad. We give somebody a bad sense of what Christianity is.

Whats the ugly?
The ugly is really taking advantage of people. One of the things that Ive found in South Africa is missionaries that have come over and made promises and reneged on the promises, whether it was Ill bring you a bag of candy, or Ill do this for you or do that, or Ill be back. The next person that comes along to minister to that person, they have to first work through that rejection, abandonment, and work through that wall. If you see people who have an orphan mentality, one of the first things that you always have to deal with is reassuring them that youre there for them, that youre not going to reject them, that youre not going to abandon them.

And thats the ugly part, because they become resentful of the Gospel; they think, OK, God will do that, or Thats how Jesus is. Yeah, yeah, you promise salvation, but you dont deliver God that sort of thing.

If you had 1000 young people what would you do with them? 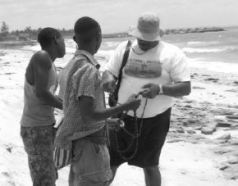 One of the things I would do would be a catalyst to help them understand what their destiny is. I think that a lot of time young people are not sure of who they are, who God is in them, and what did he create [them] to do. Sometimes that comes out of just making opportunities for them to make decisions and to really use their own equipment their own mind, their own heart to do something.

With 1000 of them, Id probably just get them involved in doing some kind of project that takes them out of their comfort zone, that takes them out of what they normally know. Because thats really when you know what youre capable of. Everyone can hang out in the comfort zone, survive, and look really good. But when youre in a place where you gotta think on your feet, you gotta rely on God, you have to rely on other people, and you have to bring that all together to make your task happen, then thats when you really begin to know who you are and what youre made of.
Photos courtesy of Divine Touch Ministries. If you liked this article, check out: Jason Gray and Social Justice

Larry is from the US Virgin Islands, used to work for Fed Ex, and now leads Divine Touch Ministries with his wife Sarah. They have three daughters and are back in the States to rest and raise more support. They have partnered with Iris Ministries (Mozambique) and Our Fathers House (Satellite Beach, FL).

For more information, check out Divine Touch Ministries You can also email Larry at [email protected]