An introduction by the publisher:
Paul Kuritz’s newest book, The Fiery Serpent (Winepress, December 2006), is unique in setting forth a Christian theory of theatre arts and answering key questions about its purpose and practice today, such as:
What causes a work of dramatic theatre to come into being?
What is the function of storytellingfor God? For humans? For actors and artists?
What is the relationship between the words of a script or screenplay and The Word?
What makes a play or film beautiful, good, or evil?
Kuritz’s first prayer was, Dear God, please dont make me a born again, evangelical Christian. This surprising prayer was the beginning of an academic questa journey of faith.

What inspired you to write this book? 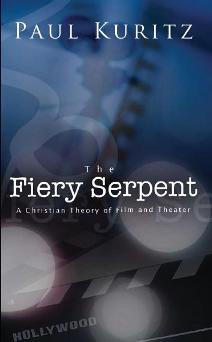 Having become a Christian against my will, I had to figure out if the career Id been in for forty years was one that I could still pursue. Late in 1999 and 2000 I had to think, Should I give this up?

What were you doing for those forty years?
Acting, teaching directing, directing plays (once in Europe), writing plays.

As a Christian, what is your view about engagement with popular culture and film in particular?
Jesus was certainly engaged in pop culture. People were trying to get by as best as possible, doing lots of different things, and Jesus was right there with them. Christians need to be out where the people are. Jesus was very engaged in popular culture and we should follow his example.

What would you say to those Christians who condemn film and art because of its evil and those who consume it all?
Those who condemn it have a healthy respect for the enemy. Hes a very powerful enemy and the arts are his favorite playground. Here, the enemy rules, hes the prince of the earth. If you get people entertained, you get them distracted from the hole they have in their heartthe void that only Jesus can fill.

You speak of the power of the visual arts to deter someone away from the Lord. Can you give some examples of films that use a powerful depiction of evil, yet would actually construct and redeem rather than tear down?
In The Passion of The Christ, the depiction of the demons and the Devil…creeping around and being deceptive and all. The Devil is the epitome of evil and the depiction of the Devil in this film is actually a witness for Christianity. The Exorcism of Emily Rose. The Sopranos. They are all redemptive and use evil in different ways to convey their message.

Why should a Christian be concerned with aesthetics in film and how can they show their concern?
AestheticsIm not sure that we should be concerned with aesthetics as much as glorifying God. Its sort of worshiping the form rather than the message. The Holy Spirit is willing and able to use any form of music, film, theater, any sort of artits all his. People do have favorite forms. And Im not saying you shouldnt appreciate beauty, but Christianity is about the message. Ultimately what does the piece of art say?

What does it mean to be a Christian theater artist?
It means that men and women, isolated in time and space, armed with the power of the Holy Spirit, seek to imitate the creative life of the God of the universe, take their human experiences and, through prayer and meditation, transform their personal lives into a meaningful universal story of redemption, pointing all who see or hear it to the Kingdom of Godthe glory of God and the joy of life now and forever. Through the power of the Holy Spirit and by the grace of God, Christians working on stage and before the camera can transform humanitys aesthetic experiences into religious experiences, as the life that had been a mystery is saved by the actual experience of the living God.

In a previous interview asking about what makes film good or bad you said, If a film is false, its bad, if a film is true, its good. Can you expound more on that?
Any film that says you can be happy apart from your own instinctswhat you know to be trueis false and bad. A Christian should make a film about a life redeemed through an in-breaking of the Kingdom of God.

What about movies like Dogville, that are just utterly depressing, and still dont seem to have any redemptive qualities?
Movies that show how awful the age is, how miserable things can beyou dont need film to know that.

What is your favorite movie or play?
The Searchers may be enjoyed either as just a great story or as a complex metaphorical exploration of our lost and wounded human condition.

What are your future plans?
Post-production work on the film, A New Life. Rehearsals for the stage production of Royall Tylers The Contrast. Various book signings and mini-lectures in conjuction with The Fiery Serpent.

For more information on Paul Kuritz and how to purchase his book, please click here.

Paul Kuritz is a professor of theatre at Bates College in Lewiston, Maine. He has written The Making of Theatre History, Fundamental Acting, and Playing: An Introduction to Acting, as well as plays such as The Yellow Wallpaper included in The Best American Short Plays 2001-2002.