Is is he a man? asked Lucy.

Ooh, said Susan, I thought he was a man. Is he quite safe? I shall feel rather nervous about meeting a lion.

That you will, dearie, and make no mistake, said Mrs. Beaver, if theres anyone who can appear before Aslan without their knees knocking, theyre either braver than most or else silly.

Then he isnt safe? said Lucy.

Safe? said Mr. Beaver, dont you hear what Mrs. Beaver tells you? Who said anything about safe? Course he isnt safe. But hes good. Hes the King, I tell you.

– The Chronicles of Narnia – The Lion, The Witch and The Wardrobe, C.S. Lewis

I often tell people that I used to know well in life, that Im now a different person. I feel that they may get nervous when hearing this, except when I explain, I dont hear much back in response.

I sit at a coffee shop now, as I write this, and remember sitting at this very table discussing with a friend about going to Chicago for the summer to work with Chicagoland Community Church. Only this time last year, I made it to Chicago feeling very uncomfortable. I became very vulnerable to my faith and realized what conviction combined with action looked like. I began to fall in love with the people I met and my heart was wrecked in ways Id never felt before.

Our church parking lot consisted some nights of fancy Lexus and BMWs from the restaurant down the street. Next to those cars were rusty shopping carts that our sisters and brothers used to carry around their only possessions. Such lost hope in one of the richest cities of the U.S.

I learned what it was like to be a ragamuffin from Brennan Manning. I began to question why God made stars and painted deserts from Donald Miller, and my world was turned upside down for the least of these by Shane Claiborne. I wondered how such parallels existed and why such poverty goes unnoticed, not only of material things, but also of our hearts.

Why did I feel uncomfortable? Id seen all of this before. I had passed by the homeless my whole life. What made it so different now? I didnt just want my brothers and sisters to be a mission to me; I wanted their friendship. I wanted relationships. I wanted feelings that had flesh on them. I held back tears on the way home, flying back into a city that seemed to move so slowly. A reverse culture shock, they call it.

School started back. I became heavily involved with Invisible Children. Some friends and I decided to show the film. It was something that made our hearts beat fast. We had a great turn out as our school continues to support Invisible Children with many new faces to help end a twenty year war in Northern Uganda. 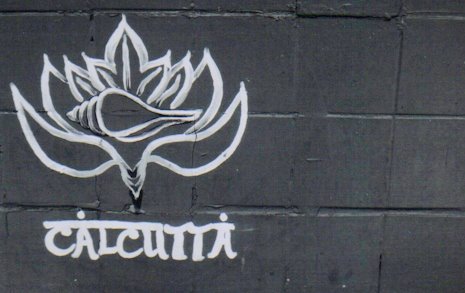 Though my heart ached for Africa, there was another place that I felt God needed me to be.

My thoughts could not shake Calcutta, India, only recently finding that she would be my home for four months this fall.

A friend recommended me to Word Made Flesh, an organization designed to place light in the dark places of the world, and serve Jesus among the poorest of the poor. I am still in the wonderful and scary process of raising funds for this trip, as well as preparing my heart for the construction it is about to undertake.

In Calcutta, my teams main focus is to bring light, and hope into the brothels of Calcuttas red light districts. We will be there, trying to educate and encourage the women and children involved in this lifestyle to another way of life. Also, while in Calcutta, we will be volunteering in the Missionaries of Charity homes for the destitute and dying. There, we will be bathing, feeding, massaging, and loving on these people as they live out the last days of their lives with love, and dignity – to take away the sting of death, and as Jesus talked about in Matthew 25, that when you love on the least of these brothers (and sisters) of mine, you have done it unto me.

What would it actually take to change poverty? Not to maintain it, or to write a check to feel distanced from the pain, but to actually change a life of poverty in which millions are born into?

I am inspired by Mother Teresas words in which she beautifully says:

Let us touch the dying, the poor, the lonely and the unwanted according to the graces we have received and let us not be ashamed or slow to do the humble work.

So my brothers and sisters, let us touch the dying, the poor and the unwanted.

Let us follow the great Lion. After all, “Hes the King, I tell you!

If you liked this article, read more about Josh’s trip to India: Imagination: A woman in Kolkata, India

Josh Casper is a junior at the University of Southern Mississippi who participates in various church ministries and community projects. Josh is currently majoring in Psychology and hopes to someday use it in counseling.