Brian Lee represents an old college pastime for me: falling in love with indie rock groups. When I was getting my undergrad, Brian was part of a group that all of my friends and I admired called For All the Drifters. We used to listen to The Drifters on road trips and late-night hangouts in each other’s dorm rooms. There was something comforting about the music in how different it was. Every once in awhile when I’m feeling nostalgic, I’ll pop in a CD. However, the band went its separate ways, and some of the members moved on to create two other groups: Paper Route and Brian Lee and His Orchestra. 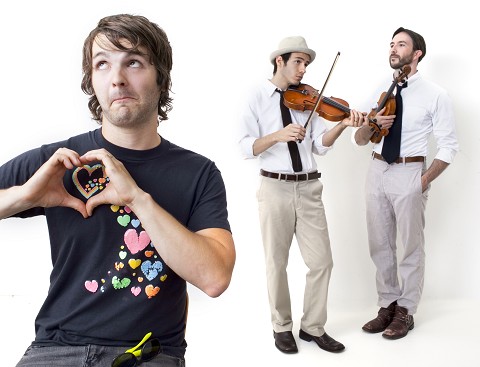 It has been years since For All the Drifters have played together. That is, until recently.

If you’re a Drifters fan, then I’m afraid that I am about to disappoint you. A friend recently invited me to a show where Brian Lee (orchestra included) and Paper Route were playing a show together… as in, they were playing at the same venue. Nonetheless, it was a treat to hear one of my favorite bands dissected into two very distinct sounds, both of which I loved.

Paper Route was one part electronica with keyboards, loops, and synths and one part powerhouse rock with lots of harmonized vocals, plenty of distortion, and feedback (the good kind). Lee was stripped down with a simple four-piece that consisted of little more than a trap set, his clean, slightly over-driven Telecaster, and soulful, growling melodies. That got me thinking. I had read some interviews of Paper Route, but I hadn’t heard much about Lee and His Orchestra. I wanted to know what was behind all those bluesy riffs and heartfelt, almost painful, lyrics. There was a depth in it that needed to be explored.

Shortly after the show, I had the chance to interview Brian Lee. What transpired went a little something like this:

You’ve played with a lot of different bands with different sounds and styles. Can you share why music is important to you and what playing it does for you?

Well, I’m not exactly sure what it does for me, to be honest.  It seems to have a really strong hold on me.  I think of myself as very balanced person, but I still find myself not sleeping at night, playing a new song over and over in my head.  I think about it all the time.  There is also the spontaneous side of music that I love.  When I play live I feel like I’m in a dream.  It’s really amazing when everything is going well at a show and the song gets to be what it was in your head originally.  I think that is why musicians are willing to make such huge sacrifices.  Because the feeling of music can be so powerful when it is at it’s best.

The first EP had kind of a raw, almost Americana sound to it who/what was your inspiration for that?

I’ve always loved feeling like I’m playing a style that’s foreign to me.  When we started recording Vol I., Jordan and I were both listening to a lot of Ray Charles, Neil Young, Ryan Adams, Sam Cooke and that kind of stuff.  None of us had ever played anything like that before and we wanted to do some songs that felt natural.  I remember the first time Ryan played drums on “I Just Got Off A Train” he was just laughing and smiling.  Ryan and I have played together for a long time and in the past his drumming has always been very hard hitting, and rigid, with a lot of very complex beats and changes.  Here he was playing this country shuffle, and having this surprise, euphoric experience.

How is Brian Lee and His Orchestra a departure from other projects in which you’ve been involved?

Stylistically, motivationally, and selfishly.  I say that because we have been doing this music for ourselves.  We spend probably 90% of our time writing, recording, talking about music, listening to music, and hanging out together.  The other ten percent has been spent playing shows and promoting the band.  In the past, bands I was in were the opposite of that.  Our focus as a band is almost entirely on putting out records.  We have been together for about a year and a half and are about to release our second album.  It’s really exiting to be able to get stuff out that fast.

What is the song “Wake Up My Brothers” about? It has almost an “old” Gospel/spiritual vibe to it is it supposed to reflect ideas of faith and spirituality?

Yes, definitely.  Our society is so over-entertained, over-busy, and over-saturated with media and things, things, things.  We end up having so many options that we don’t actually end up really doing or standing up for anything.  Our Christianity is widely accepted but only if you never say anything about it.  “Wake Up My Brothers” is about our/my need to be present in the things around us.  I’ve been at so many get-togethers where people could be getting to know each other but instead we’re texting our friends with important short messages like, “what’s up buddy?” or “Not too much, I’m at a party.”  I feel like we should be attentive to whatever and whoever is in front of us.  It is the only way to catch an opportunity to help someone.  You have to be listening.

Do you think music has to communicate something deeper, or can it be an end to itself (i.e. used for pure entertainment)?

I think it is good for both actually.  That’s what is so great and difficult about making music.  You never know what it is supposed to do.  I feel like the best songs have both taste and spiritual depth.  But then sometimes you just want to relax and whistle, I think that can be just as important sometimes.

Some of the newer songs, like “Tell Me I’m Not Crazy” and “Do You Want to Get Crazy?” sound like you pulled a page from an unreleased Beatles or Beach Boys demo. Do you have an affinity for vintage music and sounds? Why?

Our band name, “Brian Lee & His Orchestra,” came from me finally getting a record player and starting to listen to records.  If you go to a thrift store to find old records you’ll run into a lot of “Al Martino & His Orchestra,” “Lenny Dee & His Orchestra,” etc.  They are mostly horrible records but the thing we like about them are the arrangements and recordings.  The drums are so cool!  Big kettle drums, cymbal clashes, really soft playing, and mapped out parts.  The recordings have this big lush quality.  Try getting a good record like “Astrud Gilberto’s Finest Hour” or anything by “The Platters” and listening to the arrangements, that’s what we’re trying to do and add our own modern twist.

During the creation of this album, Let Yourself Be Happy, we listened to a lot of Doo-wop music and analyzed old pop/orchestra music, but we also had the itch to do something more wild and experimental.  I love how happy oldies music is.  Songs like “Only You” and “Stand By Me” were playing over and over in my head, but that itch for something unexpected was growing.  We dusted off all my old effects pedals and started using some new instruments; marching drums, bells, mandolin, upright bass, and lots of reverb.  We spent a lot of time running things through pedals and reverb boxes, playing with fans on the strings of bouzoukis and just trying to have fun.  When we did the drums, we tried to mix orchestral type playing with modern off beats and weirdness.&n
bsp; There’s also some 70’s Joe Cocker style drumming, and big marching band type stuff.

What are you currently listening to?

A lot of the stuff I’ve been talking about, plus some Grizzly Bear, Department Of Eagles, Dr Dog, and Mariah Carey, well, not much Mariah.

What’s next for Brian Lee and His Orchestra?

Our second album, Let Yourself Be Happy, releases on July 18 and will be available for free at BrianLeeAndHisOrchestra.com. Next up, Volume Three!  At the time of this interview, our second album isn’t out yet but the third one is already started.  We are already getting all kinds of new instruments to play with.  I just bought a hundred year old pump organ at an auction for $2.50, Jordan just got an original MiniMoog, and Ryan just bought two different vintage Yamaha synths, and is on search for a kettle drum!  Who knows what it will sound like!  That’s the fun of music!  We also like to make different kinds of videos so there will be some more of that soon too…

Our albums are always free to download at www.brianleeandhisorchestra.com.

Jeff graduated from Illinois College, a small liberal arts school, with a degree in Spanish and Religion. He lives in Nashville, TN with his wife Ashley. He works for Adventures in Missions, edits this silly little magazine, and loves to do new things. Check out his blog: Pilgrimage of the Heart