Fantastic Mr. Fox is a unique and quirky animated film fantastically filled with Wes Anderson spirit. Inevitably, it is the characters that make this film so unique. 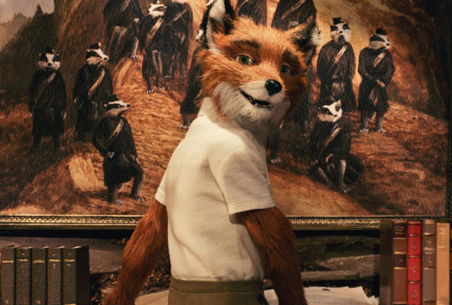 Voiced by George Clooney, Mr. Fox is a clever, daring rogue who succeeds over every obstacle put before him, including his dangerous escapades stealing livestock from local farmers. Yet he has one thing holding him back: a family.

While Mr. Fox lives for adventure, Mrs. Fox (Meryl Streep) yearns for a normal life, in which she can be assured of her husband’s safety. So following a few close calls and news of becoming a father, the sneaky thief promises to end his risky lifestyle. But refraining from a life of crime is eventually too much for Mr. Fox to handle.

After writing a column for a newspaper, buying a home he can’t afford, and bottling up his feral instincts for a dozen fox years, he goes back to his old ways with his new sidekick Kylie (Wally Wolodarsky), a seemingly dense opossum. Except this time, Mr. Fox chooses the wrong victims: Boggis, Bunce and Bean are three unforgettable farmers who will stop at nothing to catch the culprit, even if it means bringing every other local vermin into the hunt.

While Mr. Fox reaps the consequences of acting like a wild animal, his character is relatively static. His son’s, however, is not. Ash (Jason Schwartzman) is an eccentric runt with big ambitions to make his father proud but little athleticism to do so. He wants to be “successful” and popular, just like his dad, but he simply doesn’t fit the mold, leaving him feeling alienated. Therefore, when his smart and sporty cousin, Kristofferson, visits, Ash is by no means pleased.

Throughout the plot, Ash makes countless, desperate efforts to be someone he is not, but these endeavors only lead to more problems and more conflict between him and his family, not to mention getting Kristofferson trapped by the three vengeful villains. But as the story unfolds, he begins to embrace his individuality and learns that he is genuinely loved despite how different he may be than his father.

Although the characters and plot alone make this film spectacular, there is more: Fantastic Mr. Fox is visually genius. Anderson has already accomplished bringing originality to standard film; he has now done the same with stop-motion animation. In comparison to the three-dimensional, computer-generated creatures prominent on screen today, these furry animals are far from realistic, but this is not unexpected of Anderson. He is notorious for creating unconventional, nonsensical sets and characters that astoundingly project reality in a way other films, on the opposite side of the spectrum, do not. An inventive, handmade set perfectly mixed with digital technology makes this film an optical novelty.

The film’s ingeniousness, like all of Anderson’s flicks, is enhanced with a well-crafted soundtrack. The original score by French composer Alexandre Desplat is precisely blended with pleasurable tracks by an array of artists, such as Burl Ives, the Beach Boys, the Rolling Stones and the Bobby Fuller Four.

Because the movie is an adaptation of a children’s book by Roald Dahl, like Spike Jonze’s recent magnum opus, Where the Wild Things Are, the question certainly arises: Is this a film for kids? In terms of content, the film is unquestionably appropriate for young people, unless you take offense to profanity being replaced with the word “cuss,” a humorous spoof on euphemisms practiced by the characters. The plot is elating; the characters are jaunty; and the themes are constructive.

Anderson’s distinct style is the only element which may not digest well for little ones, but the same goes for adults. The ambiguity prominent in his films is not appreciated by everyone. Thus, Fantastic Mr. Fox’s obscure set and deadpan humor could leave some moviegoers confused or unsatisfied. With that said, the film may very well be Anderson’s best. It is colorful, unique and nearly flawless.

Although it won’t get the attention it deserves because it’s animated, Fantastic Mr. Fox is one of the best movies of 2009. You probably won’t leave the theater reexamining your life, but you will definitely leave smiling.

David is a copywriter, freelance writer and recent graduate of Southwestern Assemblies of God University. He enjoys spending time with his wife, family and friends, watching movies and drinking coffee.