One week night several weeks ago, my wife Ashley and I decided to see The Box, a movie with Frank Langella and Cameron Diaz that we thought would be a bit of a suspenseful thriller. I had no idea how wrong we would end up being. 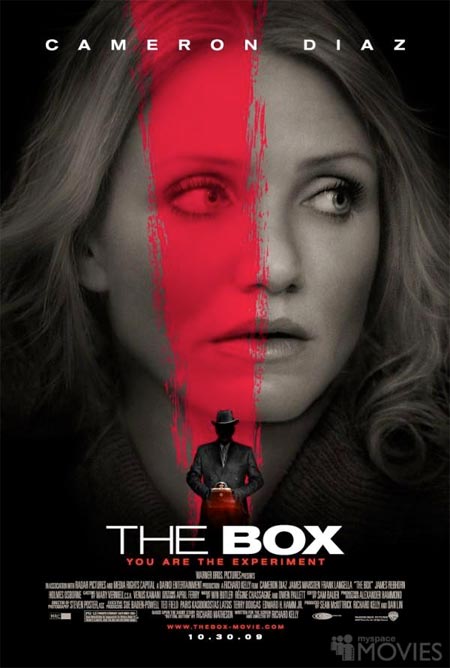 The films starts off with Cameron Diaz’s character Norma Lewis (who is a teacher) sharing with her class about existentialist philosopher Jean Sartre and his play No Exit. According to Sartre, she informs them, “Hell is other people.” Sartre’s picture of hell is, essentially, the movie’s plot.

Through a series of unhappy coincidences, Lewis and her husband Arthur (played by James Marsden) discover the hellishness or not being able escape your mistakes, of being reminded of them by other people. One afternoon Arlington Steward (Langella) arrives on the Lewis’ doorstep, offering them an opportunity to win a million dollars if they will only push a button that consequently ends the life of a random person they don’t say. Later on in the film, we learn that Steward should be dead, that he may be no long himself at all any more. He tells the Lewises that he got struck by lightning and has been able to communicate with “the lightning makers” ever since.

Apparently, these lightning makers are interested in testing humanity (what is referred to as the “experiment”) to see if there is any moral compass left on earth worth salvaging. So far in the process, they haven’t found anything worth saving. This aspect of the film speaks volumes about morality and the temptations we all face and succumb to daily.

We never learn exactly who or what these lightning makers are, only that there is a certain deified trait to them. Although the movie is incredibly difficult to comprehend and follow, it paints a very clear picture of human depravity and what life (and eternity) could look like… without forgiveness. It reveals to us the justice we all deserve the constant reminding of our failures and the judgment those transgressions merit.

Without a doubt, it was the film-makers’ intent to tie in the plot of The Box with the theme of Sartre’s No Exit; in fact, at one point in the film, Norma and Arthur find the words “no exit” written on their car’s windshield after leaving a party where they are hounded by their .

Throughout the film, they are constantly reminder of the fact that they cannot escape their one sin that haunts them. Towards the end of the film, the two actually wonder out loud if they are in Purgatory, but no answer is given. When asked, Arlington Steward only smirks with the half of his face that hasn’t been cauterized by a lightning bolt. Anxiously, Norma (Diaz) pleads with desperation, “Can I not be forgiven?” As she uttered the words, my heart leaped in the theater. In the film, the question lingers. Finally, Steward answers in that eerie Langella voice, “I don’t know…”

This was my favorite part of the movie, because this is the question we all are asking (even existentialists): Can we be forgiven?

It is the one thing we all are longing to know: Can I really be forgiven of all my mistakes and failures? Can the past be washed away and blotted out… forever? Or am I condemned to find no escape from all of my shortcomings? The movie lets you wonder. It even presents an unpleasant alternative to having your sins washed away. I won’t give away the ending; I’ll only say that where this story does not resolve, ours can, thankfully.

We all have constant reminders of our personal moral failures in life the things that bug our consciences when we are daydreaming or lying awake in bed at night. We all have skeletons in the closet and demons in our past that taunt us, reminding us of how short we’ve fallen from perfection. Without grace, these memories haunt us, terrorize us today so that we may never be free of yesterday. In The Box (and in No Exit), a person’s indiscretions are never forgotten. That would be hell, indeed.

I’d recommend The Box for no other reason than these undertones that an uncareful viewer might miss. Nonetheless, they are there. In many ways, this film resembles the account in Genesis 3 of Adam and Eve’s fall. We are all faced with decisions that determine our fate, and this could not be more clear than with the story of Norma and Arthur and the unfortunate box that ends up on their door step. It’s a haunting depiction of the evil of which we are all capable, but it also carries with a few twinges of hope. Occasionally, we need a jarring account of reality, however unsettling it may be. It helps us better appreciate grace.

Watch the official trailer of The Box on YouTube