Nathan Walker is an up-and-coming musician who just founded the group Skylines and Archives. We connected with him on the Wrecked Myspace page. He’s got some great things to say about life, emo culture, and New Zealand.

Okay, you know the drill – who are your influences, favorite artists, and all that junk?

I started listening to music in the fourth grade when my great-grandma gave me an AM radio with two stations: oldies and symphonies. I started playing guitar and writing music in the 9th grade when I was young and impressionable.

I always hate the influences question because I just want to list off every band out there that I love. My basic guitar influences would probably have to be mostly John Mayer and Bebo Norman for acoustic, but for electric I’d say Ross Childress (Collective Soul) and Joel Hanson (PFR). The bands I’ve been in to most this last y ear have been Further Seems Forever, Jimmy Eat World, Death Cab for Cutie, The Format, Mae, Dashboard Confessional, Paper Route, As Lovers Go, Brand New, and Brandtsonto name a few. I know, I know, it’s really sad music, but lately that’s what I’ve been into. Every once in a while I throw on some Jack Johnson to lighten up the mood.

What really turned you on to music in the first place?
The people I really looked up to as a kid were all either musicians of some sort or big fans of music, so I connected all the dots and followed suit. It wasn’t until later in high school that I realized that I could take my music outside the walls of the church. So I began to look at music seriously and started taking steps toward becoming a “musician” in the “starving artist” sense. I had big dreams of being in a band and getting signed to a label and going on tourthose dreams have actually begun fleshing themselves out, though differently than I had expected at first… Did I answer the question? If not: The lure of finally being cool initially turned me on to music.

Is music, or art for that matter, an end to itself or a means to a greater end? Why do you make music?
All art has the wonderful ability to point toward something else. It’s like a great allegory. You can say one thing with any medium but if you take care with it, it can have a number of different meanings. Music, for example, can be one-sided and just noise for the sake of noise, but it can also be crafted in such a way that it is given a life of its own. I think that’s my favorite part about it. In a good song, the writer can have a specific event in mind and/or an idea that they’re trying convey, but for each person who listens to it, the specific event changes, even though it’s all based around that one idea. In that way, I believe that music, and art in general, has the potential to point toward a greater end.

Music gives me the ample time I need to sit and think about what I’m trying to say and what the best words to use would be to say it. Besides, it lets me use words I would otherwise never use in normal conversation. When’s the last time you heard someone casually throw out the word “zephyr”?

I feel like music matters. There’s something about the emotion in music that I’ve yet to find elsewhere. When I was just beginning to write and play music, I was really struggling with depression. I didn’t feel anything, good or bad, I just was. I didn’t understand it, but I discovered there was something about music that let me feel. So I would lock myself in my room for hours at a time, just playing and finally feeling. I loved it. I hope that through music, I can let other people feel too. That, if anything, is my end. 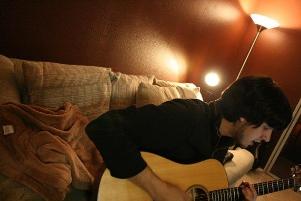 Who are you and who is God to you?
In the most basic sense, I’m Nathan Walker. I’m a 21-yr-old Minnesota native with dreams of again seeing the US through the window of a van. I came to realize a while ago that while I grew up with the idea of God all over the place, I had yet to scratch the surface on who God is beyond the misconceived ideas. About two years ago I came to a place where I was fed up with Christianity. The ironic part was that at the time, I was a full-time missionary playing music across the US and other parts of the world. During one of the breaks, I was working in a warehouse packing boxes with Target supplies.

Through those mindless hours, I was able to get to know a girl whose life was truly in shambles. She told me about how her boyfriend had left her the fall before when she’d become pregnant with twins and wouldn’t abort them. Then, she lost those twins on Christmas morning. Someone at her job had sexually harassed her and when she reported them, they turned it around and slapped the sexual harassment suit on her. Finding work was nigh-impossible. She went on to tell me that she was Catholic and when I asked why, she said she could do whatever she wanted and all she had to do was say she was sorry and she would get into Heaven. Having high-and-mightily judged this girl as a lost cause, I told her I didn’t buy into the whole religion thing any more.

I explained in righteous detail why my life sucked and the cynical reasons I had that Christianity was to blame for all of it. She stopped me in mid-sentence and said, “You’re so Emo.” Then she mocked me: “Everybody hates me. I’m mad at the world. This is so not fair.” Stunned, I just looked at her and kind of mumbled, “That’s nottrue” The person who had all the right in the world to complain about everything was telling me to suck it up. She got me.

A few weeks later I was discussing life and religion with a dear friend of mine and I had just shared the “You’re so Emo” story with her. “It’s true!” I finished, “But I feel like I’ve done so many bad things in life that even if I wanted Him to, God could never forgive me.” She just looked me in the eye and said, “Nathan, you know that’s not true.” And she was right! Having grown up knowing the truth the whole time, I had yet to believe it. There was something freeing about having someone tell me, personally, that I could be forgiven if I wanted. So I did want it. I’ve become a very different person from the little Emo kid I was back then. I feel now. And not just when I play music.

You’ve made your new album available on myspace for free download. Anything we should know about it before having a listen? Can you tell us about one of your songs, “ Halifax “?
Yes, yes, you can download the album from my myspace. You should know before you listen to it that it’s a live show I put on for some friends of mine and that the very gracious and very talented Mr. Luke Harger mixed and recorded it.

The song “ Halifax ” is about missing the forest for the trees. I wrote it in Denver where I’d just been completely lost the day before, looking for Halifax and finding every combination of “avenue,” “street,” “court,” “way,” and “lane” except for the one I needed. In a similar way, I feel like I’m going through life, meeting a bazillion different people, and somehow I keep missing “the one.” That’s actually the big idea behind “Skylines and Archives.”

The recording on myspace is from the monstrous 11-track EP Luke and I recorded in various homes across the US . I think Halifax was actually the first song recorded, which was written just the night before. If all goes according to plan, Halifax should be one of three songs (with Scars and Drive) to be on the Crumpled Airplanes EP, Unplugged, and the new, actual, for serious, real studio project that should be getting under way here in the next few months.

Lastly, if you were the king of New Zealand , what would you do differently?
(Little did Nathan know that this was a trick question – there is no king of New Zealand… we think we’re clever.)
If I were king of New Zealand I’d totally make up a new national language and have facial expressions determine the tense and volume would convey how much the person enjoyed their day job. Oh, and I’d give out free tacos on Tuesdays between 1 and 6pm .

Click the links below to download the free unplugged album and visit Nathan’s myspace site for a show schedule. If you’re an artist that has something to say, contact us about Wrecked doing an interview with you.