During the World Race (an 11 month mission trip) we fought for a lot of things.  We fought to be present where we are, fought to be positive, fought to maintain honesty and vulnerability when we just wanted to shut down and tune everyone out, fought to make every day the best it can be.  In Kenya another fight came to the surface.

A fight against when I like to call “Drop In The Bucket” syndrome.

We’ve all heard the analogy “a drop in the bucket.”  A description of something that is so small it doesn’t even matter.  So small that it’s not worth considering, investing in, and doing anything more than merely noticing if even that.

For two weeks we fed and hung out with street kids in Nakuru, Kenya.  They were super dirty, their clothes were a mess, some didn’t have shoes, a lot were high on glue… what could we do?  We feed them for one day, they’re hungry the next.  We take away their glue, they go buy more.  They need someone to house them, feed them, clothe them, send them to school, discipline them, hold them responsible, love them…

Then I met Hillary.

Hillary (who’s a guy) is this super awesome sixteen year old from Nakuru.  His dad split when he was young and his mom died when he was five of some illness.  His grandparents couldn’t take care of him and one of his family members (an uncle I think) abused him so he ran away to the streets.  He sniffed glue from when he was 9 to when he was 15.  He told me his story the first day I met him, and we planned to  meet again in the same area the next day.

I couldn’t find him.

I looked for him five out of the next six days, but didn’t find him.  We invited some other street boys to church on Sunday, and I asked them to tell Hillary and have him come.  And he did!

I was so excited to see him again.  I had bought him a Bible and he was super pumped about it.  After church he asked me a favor- if I would help him set up a facebook account.  We went to an internet café and started facebooking.  Hillary had a huge smile on his face the entire time.  I wondered who he would be talking to on facebook; who would be his friends?  Who would this street kid from Nakuru know that had even semi-regular access to the internet?

Well, he knew a lot of people.  He knew someone from England, from Northern Ireland, from Australia, from Denmark… he had friends within minutes.  People started messaging him, saying things like, “Hillary!  You finally have facebook!  I’ve missed you, how are you, tell me about things in Nakuru!”  I asked him, “Hillary, how did you meet all these people??”  His reply-

“So all of these people you met just because you were both on the street and they talked to you?”

I was somewhere around the sixth person (but probably more) to stop and invest in Hillary.  To talk to this formerly glue sniffing street kid and treat him like what he is- a son of the Most High King and fellow brother.  I admit, he was pretty easy to talk to.  He was clean and he wasn’t sniffing glue.  He never asked me for anything, he didn’t follow me… sometimes that happens.

But he wasn’t always that way.  He wasn’t always away from drugs, he wasn’t always living in a real house (he lives with a friend when he’s on holiday from school).  He didn’t always get to go to school.  I didn’t ever see him in that way, but someone did, and someone stopped anyway.

This is what Hillary had to say about his life-

I love God for his faithful mercies! He brought me out of street and now I’m living like a normal human being. Glory and thanks belong to Him! Nothing is impossible through God. Just let us believe in Him.

So here’s what I am left with-

What if those other people had never bothered to stop and talk to Hillary?  What if every one of those foreigners thought, “Oh, I’m only here for three more weeks, I can’t do that much, I don’t even know this kid, I don’t want to have an attachment here…”

If he calls you to put a drop or two in it, do it.  Heck, if he puts you in a situation where you CAN put a drop in it, do it.  What’s your bucket?  Where are feelings of being too small to cause change keeping you from acting?  Don’t listen to those lies.  Just because you can’t see results doesn’t mean your work is fruitless.  You never know if that drop is being multiplied by other people, and you never know who that drop is landing on.  If was you, you just might want something on your parched tongue.
Even if was only a drop. 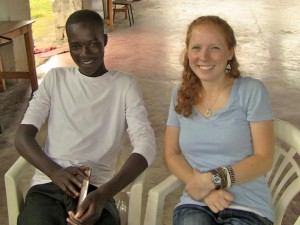 Hillary and I at church in Kenya