I had the opportunity to sit with blogger/author Anne Jackson last week at Merridee’s Breadbasket in Franklin, TN (an excellent place to get a cup of coffee and breakfast, if you’re ever in the area), and we spent a couple hours talking about writing, missions, church, social media, and building a tribe. 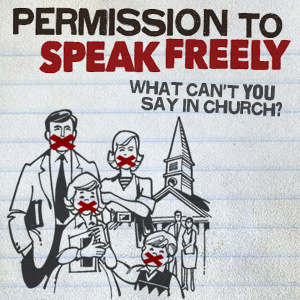 I asked her what the number one secret to building a tribe was — that is, how she assembled such a large audience around her blog Flowerdust.net.

Her response was simple: “Honesty.”

She further explained, “I wish I could give some great answer, and I’m sure that there is one, but I can’t think of it. All I can say is to be honest.”

Permission to Speak Freely began when Anne posed a question on her blog: “What’s something you feel you can’t say in church?” After 337 responses (484 to date), Anne realized that maybe she was onto something. Maybe some people felt like they couldn’t be honest in church. Maybe a new form of confession was in order. Since then, Anne has been accepting creative confessions from anyone who has felt ostracized or judged by the church, as well as testimonies of brokenness and healing that people have found through the power of confession.

Not one to skirt around delicate issues, Jackson seems to embrace controversy, but not for the sake of contention. Rather, she does so out of compassion, with a desire to see God redeem painful situations. Her new project closely follows the theme of burnout and brokenness in ministry (and her subsequent journey of healing) that Anne first broached in her debut book Mad Church Disease (Zondervan).

Permission to Speak Freely: Essays & Art on Fear, Confession, & Grace (Thomas Nelson) comes out in the Summer of 2010. In the mean time, you can read some of the confessions submitted, add your own submission about what you feel that you can’t say in church, follow PTSF on Twitter, and twiddle your thumbs.

While twiddling, feel free to watch this short video from Anne about Permission to Speak Freely (don’t mind the lady shouting in the background; Merridee’s is a busy place):