“Feliz Navidad!” Jubilant voices welcomed us into their home as we made our way up the steep hill in the darkness,towards the twinkling lights, music and chatter. We were ushered in to yet another home in the village, hugs all around, plates of rice and chicken shoved in our hands. Everyone was laughing, and I found myself laughing along, partly because of the contagious nature of the Kuna people’s joy, partly because I was overly exhausted, because it was 2 a.m. on Christmas. 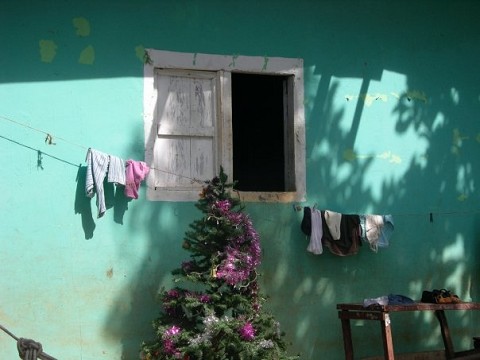 Christmas has never been my favorite holiday. The past few years, come about mid November, you can almost see my hair turn green, my eyes yellow and a scowl grow on my face. I have become so jaded. “Oh great,” you’re probably thinking, “Another one of those ‘we have replaced Jesus with Santa Claus, and celebrate consumerism’ articles,” and although I agree with you, hopefully this is a little more upbeat.

Maybe It’s just me, but its like it takes extra effort just to tolerate Christmas, let alone celebrate it. Maybe I am just a cynic. But this year is different. I have more grace on the cheesiness. I can not only tolerate but (gasp!) embrace this holiday. It’s funny how sometimes it takes stepping outside of all that is familiar in order to see what is right in front of you.

Spending Christmas in Panama last year was one of those incredibly random spontaneous decisions that turned out to be God. He was trying to get to me in a million ways, those ways that are only possible outside of everything you know. And so it was. Somehow, I found myself  far away from my family, snow, and any resemblance of a “normal” holiday season.

I went with my friend Amanda, surrounded by strangers that became friends in moments, partook in the crazy tradition of going from house to house all night feasting. I loved it. Our trip had been a riotous adventure from the beginning. The plan was for Amanda to fly to Panama City and meet my team and I, who were ending our month long Youth With A Mission Outreach. We started in Costa Rica with a larger group and split into a smaller team to go to Panama. Only we never made it over the border. One of the guys on my team didn’t have the correct paperwork, so we ended up staying in a small village at on the border.

When Amanda flew in she had to make her way eight hours to our remote location in Costa Rica. I was at the end of spending a month out of country, part of that trying to lead my team after having to throw out all the original plans for ministry out and starting from scratch. It had been frustrating and humbling and I was emotional and tired and just wanted to sit on a beach. Amanda was pumped and ready to go. We said good bye to my team and went off, two American girls alone in Latin America with no idea what we were doing.

We didn’t really know where we were staying half the time, ended up at sketchy $5 hostels, meeting some interesting people, like a man who claimed he was being stalked by a panther. We made eggs in a cheap cake pan over a hot plate in the hostel kitchen, and sipped $0.35 coffee on a dirty beach. Living the dream, really. We made our way to Panama city, and outside the city to the Kuna Indian village Amanda had been to multiple times on summer missions trips. There we found a vibrant church community that opened their arms to us, a loving family, that joyfully invited us to partake in their all-night Christmas eve party tradition.

After that crazy night, we slept till the afternoon, said goodbye to the wonderful family we were staying with, grabbed our backpacks and made our way back to the city. We had a little trek to get to the bus stop, through “LOST” like jungles, eying a giant smashed tarantula on the path in front of us. I thought to myself in that half-crazed internal narrator voice,  “It’s Christmas. I am hiking through the jungle. This is not a weird dream.” We got on a bus, one of the many sensibly nick named “Los Diablos Rojos” (The Red Devils.) Each former school bus looked as if it was entered a “Pimp my bus” competition and rode like a carnival attraction without safety features and with four times as many people crammed in the ride.

As we flew down bumpy roads towards the big city, I sat and looked out the window, thinking about how crazy my life was and how far I was from home. During the four hour church service the night before, I had done a lot of thinking. Nothing super deep and revolutionary, more like a simplifying of this thing called Christmas that I have been celebrating my whole life. The idea that God, who is indescribable, full of love and power and grace, put himself into a body of a human being, a fallen and mortal being, to be close to us. I thought of these things, and how they were to amazing for me to even understand, how the most profound truths are the most basic yet most difficult for us to grasp, how it makes sense that this true story would get buried under piles of self gratification.

My thoughts were interrupted as a man got on the bus. He made his way towards the back to the empty seat next to me. He was an enormous guy, completely uncharacteristic of the men there, especially the tiny Kuna Indian’s we were used to being around (At 5’8, I towered over the women and men). His size wasn’t the only thing that made him stand out, though. In his massive arms, he held a tiny infant.

The infant slept, oblivious to the world around him, to the bumpy bus crowded with people, to the noise and exhaust.  The man sat next to me and the baby lay, inches from me. I stared at his perfectly tiny brown nose, pursed lips, eyelashes. How safe and snug in this his father’s arms. The most vulnerable thing in the world, a tiny human being, incapable of anything on his own, so fragile. Yet God lived inside this frame.

The thought hit me, choked me up. I couldn’t take my eyes off this sleeping infant. This act of love and sacrifice we cannot even imagine, because we are not God, we are so used to being human. To limit yourself into this sort of vulnerability- God pooped and cried and needed a mom to take care of Him, yes, to save us, but to ultimately so that He could be with us.

That Christmas, on a bus in Panama, everything changed.

Brooke is a missionary with YWAM. She loves to see the world, make up new recipes, and attempt to be a poet. Check out her blog.