When Walt Disney passed away in 1966, the ethos of adventure and magic that had defined the Disney corporation died with him. The next twenty years saw a series of lackluster movies and poor business growth. Lack of financial capital was not the issue.

Lack of courage was.
Walt himself remarked,

“When I was about 21, I went broke for the first time. I slept on chair cushions in my ‘studio’ in Kansas City and ate cold beans out of a can. But I took another look at my dream and set out for Hollywood. Foolish? Not to a youngster. An older person might have had too much ‘common sense’ to do it. Sometimes I wonder if common sense isn’t another way of saying fear. And fear too often spells failure.”

Walt Disney was a courageous dreamer, and it is a tragedy that his greatest dream never became a reality. 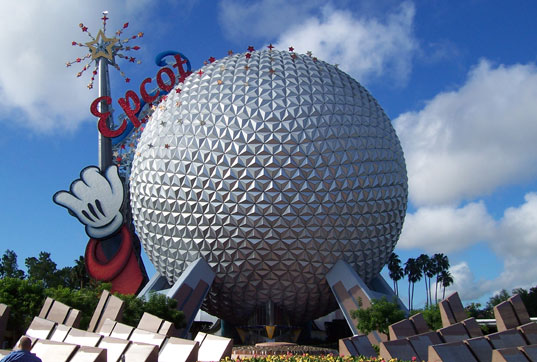 The Experimental Prototype Community Of Tomorrow, or EPCOT, was never meant to be a theme park. Not even close. Disney’s original vision for the property was to create a fully functional self-contained city that would push the limits of American and global civilization. He dreamed of a community that was always looking into the future, always dreaming, always innovating. Everything about the city of EPCOT would be futuristic and cutting-edge. Walt had plans to erect skyscrapers, build sports arenas, construct schools, hospitals, parks, churches, residential neighborhoods, even build the world’s first advanced public transportation system. Walt had it all planned out, down to the smallest details, such as the sophisticated AVAC garbage disposal system now used at Disney World today.

Referring to EPCOT, Walt declared that it would “always be in a state of becoming. It will never cease to be a living blueprint of the future where people actually live a life they can’t find anywhere else in the world.”

With everything that was going wrong in the 1960’s-the Cold War, gang violence, neighborhood crime, nationwide adolescent rebellion-Walt wanted to build a city that would serve as a reminder to the rest of us, “This is what could be.”  EPCOT was designed to be a living and breathing infusion of the future into the present, a utopian metropolis, the perfect community.

Unfortunately, upon Walt’s death, the remaining Disney executives didn’t have the balls to pull the trigger on such an expensive and visionary undertaking. They did what most of us would do and built another theme park.  With Anaheim’s Disney Land such a financial success, the stockholders and upper executives decided to merely replicate it on a larger scale in Florida. It is perhaps a blessing that Disney died when he did, for if he were to have seen what his beautiful dream became-just another theme park-he would have surely lost his mind.

Shortly before his death, he pleaded with his management team to build EPCOT. He finally compromised that the DisneyWorld theme park could be built as a strategic “draw” to get people to visit EPCOT. Your eyes do not deceive you, DisneyWorld was originally meant as a marketing ploy to get guests to visit the REAL attraction-the thriving city of EPCOT.

As tragic as this true story is, I find it even more horrifying what the Church has done with Jesus’s original vision for humanity. Just as EPCOT was designed as a progressive view into the future, the movement that Jesus created was essentially the same thing.

Christians were SUPPOSED to be a living, breathing example of the reality of the kingdom of God.

Christians were SUPPOSED to be known for their love, not their arrogant judgment.

Christians were SUPPOSED to be known for their giving, not their prosperity gospel.

Christians were SUPPOSED to be known for their actions, not their Bible studies.

Unfortunately, we have polluted Jesus’s original intent on a much grander scale than Disney’s executives polluted his. “The Way,” as the early Christian movement was called by the rest of the world, was known for its love and sacrifice. Early historians commented that the apostles’ preaching and evangelistic techniques were often unnecessary, because their actions were enough to cause people to join their community.

If Christians can somehow, in some way, recover the original dream of our leader, maybe we won’t be known by what we aren’t, but what we are.  According to Walt, “All of our dreams can come true if we have the courage to pursue them.”

Perhaps we should take a hint from the “happiest place on Earth,” and get to work.

Tim is a writer hoping that somehow, someway, his work will influence the world in a positive way. He is currently an undergraduate student at North Central University in downtown Minneapolis.