Shane Claiborne recently wrote an article for Esquire Magazine about the love of Jesus and directed it specifically to non-Christians. In the article, he speaks about the love of a Christ who may not always be on the side of the religion that represents his name. He suggests that maybe the televangelists and street preachers are wrong — that God, indeed, is love, not judgment and condemnation and even hatred. Furthermore, he apologizes to those who have been hurt by the church and pleads with them to reconsider their thoughts about God. 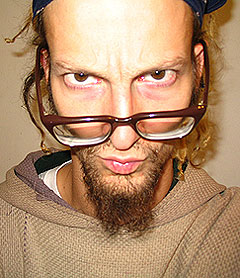 As you can imagine, this little letter has sparked quite a bit of controversy (as do most of the things that Claiborne does). Here’s my imperfect take on it, humbly submitted to you…

First of all, let me congratulate Shane for doing something Jesus would do — go to a questionable place (i.e. Esquire.com, where there are links to photos of half-nude women and articles about the history of marijuana) and talk about God.

While the fact that this article was written for Esquire undoubtedly offended many, it was a bold, courageous act. It was reminiscent of the parable of the great banquet in Luke 14, where the master is turned down by all of his guests who are too busy to come to the feast. So, he invites all of society’s rejects to come and enjoy the banquet, commanding his servant, “Go out to the roads and country lanes and make them come in, so that my house will be full.”

Maybe the “roads and country lanes” in our context is Esquire Magazine (for starters). This is the love of God — a radical desire to pursue his Creation, no matter how broken it may be, so that we may become his children. When I am at my wit’s end about how this whole God-thing works, I always come back to this relentless, ridiculous love of a Father for ragamuffins that comforts me. It’s real, it’s offensive, and it’s something that the world needs.

Second, let add a layer of caution/discernment: I don’t know what Shane believes. However, without knowing exactly what he believes about heaven, hell, and salvation, we can still respect and find truth in some of what he says. I’ve read all of his books and can tell you that while I do still kind of scratch my head at some of what he seems to believe, I have also learned quite a bit.

Over a year ago, I interviewed Shane Claiborne on the phone for about an hour and walked away thoroughly impressed with his humility, love for God and Scripture, and his commitment to serving the poor. He responded with fairly orthodox answers to questions about the Bible, evangelism, and the social Gospel. In the process, I realized that we don’t have to have each other “figured out” — we don’t need to nail down exactly what one person believes in order to agree with her. That’s why I can nod my head in agreement with Shane when he says:

I did not choose to devote my life to Jesus because I was scared to death of hell or because I wanted crowns in heaven… but because he is good. For those of you who are on a sincere spiritual journey, I hope that you do not reject Christ because of Christians. (Read more: What If Jesus Meant All that Stuff?)

Shane makes this same point in the article, pointing to the parable of the Good Samaritan, explaining how God often uses unlikely, irreligious characters to tell his story or teach us about true godliness. If you’re someone who is reading this and struggling with Shane’s theology, consider the possibility that you may still be able to learn something from him.

Third, a short, creed and a dispute: I believe in hell, I believe in heaven, and I trust God enough to make the judgment calls, regarding who goes where. That’s why this statement that Claiborne made in the article was somewhat disconcerting: “If those of us who believe in God do not believe God’s grace is big enough to save the whole world… well, we should at least pray that it is.” What does that mean, exactly? It seems that Claiborne feels that hell is a piece of Christian theology that requires an apology. At one point, I felt a similar amount of discomfort with this idea. After all, who hasn’t heard the following question and been stumped: “How can a loving God send people to hell?”

Sadly, the idea of hell has been, in some cases, misunderstood and even abused to further a religious or political agenda that has no basis in the love or compassion of Christ. While it doesn’t bring God any delight to see people go to hell, he is equally grieved when we assume that sin is somehow tolerable or acceptable. So, this suggestion made by Shane that hell is a contradiction of God’s love doesn’t make sense. I believe in the truth of the Bible, the radical grace of a loving God who can save anyone, and the punishment of unrepentant disobedience against God.

There isn’t necessarily a disconnect between love and punishment. Any parent can understood that one doesn’t really exist without the other. The truth is that in all of our altruism and compassion, all of us want to believe that the universe is a fair place, that events like 9/11 and the Holocaust do not go unnoticed. We want to believe that there is justice and that the Creator of all of what we see and know rights all wrongs, one way or the other.

And I think that he does.