I have officially experienced the greatest church service of my entire life.  And it happened in a men’s prison in Soroti, Uganda. 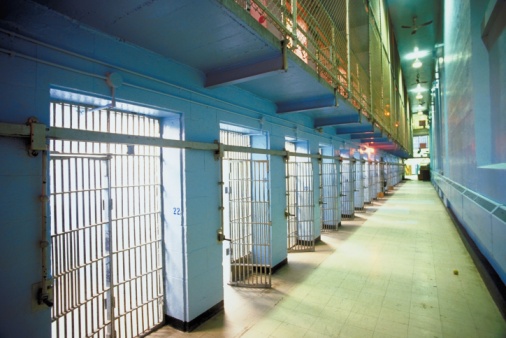 On Sunday, after church, we climbed on a batch of bodas and rode off to the outskirts of town.  A brief downhill ride later, we coasted into the Soroti government prison.

I have to be honest.  I was terrified.  I mean, the only interaction I’ve had with the word “prison” usually involves really intense movies or some kind of over-dramatized depiction of life in the slammer.

This was definitely not a prison film.

Julia went with Mike and Denise to the women’s side of the prison, while the rest of us went with Pastor Jane to the men’s side.  One of the inmates, Alex, met us at the gate and shook our hands, saying, “Praise the Lord.”  He took Grant’s guitar case and took us through the compound, which was open and sunny, where prisoners were walking around freely.  Some were in the prison’s yellow uniforms; some were in street clothes.  Alex led us under the shade of a mango tree, where a few benches and a lectern were set up for us to hold a service.  More church services should take place under fruit trees.

The first ten minutes of the service were the best ten minutes of my life.  There were about 150 inmates around us, under the tree and seated outside nearby buildings.  A group of about ten had instruments in hand.  There were thumb pianos, drums, small harps, hand shakers, the works.  And the men who had no instruments had their hands, and when the music started up, those hands clapped with more fervor than any congregation I’d seen yet.  Their voices called out loud and strong, and they danced in time to the music, keeping the beat with their hands.

These men had lost their earthly freedom, but they had the understanding of their spiritual freedom: the freedom that is found in Jesus.  It’s a humbling experience when a group of African inmates can “out-praise” the largest megachurch in the States.  It’s also the purest form of praise.  When you have nothing, not even your freedom, you have nothing to lose or gain.  There’s nothing holding you back from yelling at the top of your lungs.  So they did.  They jumped, they danced, they sang, they shouted, they expressed their joy to their Lord above.  All this from the confines of prison.

Joe delivered a message to the men, after which, we asked them if they could play again.  Again, the thumb pianos started up, and the voices rose.  We weren’t allowed to bring cameras into the facility, but even though none of us were able to get video footage, the songs that were lifted in praise will stay with me for quite some time.

I wonder why prisons in America aren’t as joyful as the ones in Uganda.

Liz is a missionary on the World Race, an 11-month mission trip around the world.