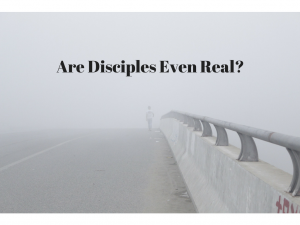 Are disciples even real?

They seem illusive. People you talk about but don’t really see. Kind of like a magician that does something amazing right before throwing down a cloud of smoke and disappearing. I’ve head the word “discipleship” thrown around, but all I see are two people getting coffee while one talks about her problems. It doesn’t look like what I saw the Twelve doing.

Jesus said to go and make disciples of all nations. But I can’t remember ever talking to someone who described themselves as a disciple. They say they are a Christian or a follower of Jesus. But there were plenty of followers of Jesus in the New Testament that weren’t his disciples. So where are they today?

Am I missing it? Is being a disciple supposed to be a secret identity, something we keep behind a mask? Is there a supernatural moment where I go from being a follower to being a disciple? Cause I feel like I’m just waiting for something to happen. Anything.

All this makes me wonder what it even means to be a disciple.

I heard someone say that discipleship is living like Jesus lived. And I suppose that’s true. The Twelve got there eventually, after bumbling around for a bit. But before long they were performing miracles, preaching to the masses, and healing the sick, just like Jesus did. Is that what it means to be a disciple? Because right now I’m not doing it.

This is a conversation we don’t have enough. We don’t often ask ourselves, “what is a disciple?” Or then the follow-up question: “Am I living like that?” But this is the commission. How can we make disciples of others, if we aren’t living like a disciple ourselves? How are we going to change this generation if not through discipleship?

When Jesus said go and make disciples of all nations, I think he meant it.

He didn’t say, “Go and life your life, only mentioning me when it’s comfortable and expecting nothing to look different because of me.”

Whatever being a disciple is, I’m in. I’m not going to hold back. I’m going to figure out how to live this life. I want to stand out. I want people to ask questions. I want to live a life that’s fully alive, and everyone else can tell. And I don’t want to hide. I don’t want anyone to have to struggle to find me. I want to come out of the shadows and let the whole world know. That I am a disciple of Jesus.