Part of me wonders if she wrote that after scrolling through her Facebook newsfeed on a midweek afternoon.

She probably didn’t. But that lyric perfectly illustrates one ugly, uncomfortable truth: you and I just don’t give a damn anymore. About anything.

And I want to disarm the impending counter-argument before it even starts: no, we don’t care. How do I know this? Just click over to the lovely blue interface of Facebook, and the point is made.

The useless debates, fear-mongering and unchecked facts swirling around social media today regarding everything from zoo animals to lesbian overtones in Disney sequels have come to embody the full extent of our involvement in cultural injustices.

People today are caught in this weird in-between state of feeling appropriately strong emotion, maaaaaaybeeeee speaking out about it…but then allowing themselves to feel a sense of accomplishment for doing absolutely nothing.

We’d rather believe that the world will right itself if we just say the right prayers or fact check Sally’s mom on a comment thread. 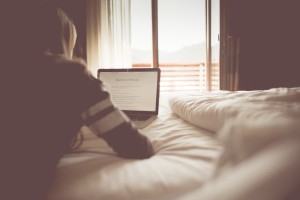 Christians are guilty of using the New Testament story of Jesus overturning the temple market as justification for being downright mean. Someone no longer a character in my newsfeed posted a political article under the pronunciation that, “I don’t care if this offends you, Jesus flipped tables so I’m gonna get angry about so-and-sos political agenda!!! Hillary is scum!!”

Around that same time, I came across a headline that read, “Jesus flipping tables isn’t an excuse for your online political rants. Anger should be the exception, not the standard.”

That, and the simple fact that you are not Jesus.

I apologise if this is news to anyone.

Anger is an emotion created by God, meant to be used on behalf of injustice and oppression. You and I are being lousy stewards of the resources and emotion God gave us if we only use them to elevate our opinions on social media, citing Matthew-something as justification for what is actually pride and malice.

Our emotions were never meant to live and die on social media. They were meant to rile us so much as to put us on a plane, write a check or take a stand.

I’m sure there was at least one individual who, inspired by the recent death of 700 refugees on the Mediterranean Sea, chose to radically uproot the comfort of their life to devote their time and energies to pursuing justice and protection for future crossings.

Me? Personally, I can’t name anyone.

Most of us closed the Facebook app, satisfied with our cardboard argument and naive finger-pointing, and went back to our place in the sofa.

America, people are suffering and dying, and we’re hoarding the resources to make it stop.

You are the change.

We came into this world with the resources available to combat evil. We live in the first world. You are reading this on a digital screen while connect to Wi-Fi, meaning you are 76% more connected than most other nations in this world.

And we are using that privilege to do…what, exactly? To hold off boredom, to argue?

So why are our faces dry?

What’s it going to take in this day and age, where every resource is available and known to you, if you can’t find something to fight for?

One man famously asserted, “All it takes for the forces of evil to prevail are for a few good people to do nothing.”

Jesus doesn’t really care what you think about the gays vs. Christian debate (and let’s face it, that’s exactly what we have has allowed it to become).

He doesn’t care how you feel about endangered animals being shot and killed.

He cares what you’re doing about it.

So….what are you doing about it, anyway?